Three of a Kind with Two Wild Cards

Written and Directed by Robert Homeyer

Off Off Broadway, New Play
Runs through 12.1.13
Theater for the New City, 155 First Avenue 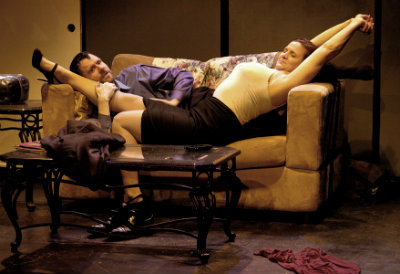 Robert Homeyer and Steph van Vlack in THREE OF A KIND WITH TWO WILD CARDS. Photo by Peter Welch.

The first few moments of Three of a Kind with Two Wild Cards prepared me for the type of strangeness the audience encounters in this production. Such absurd dialogue drew me into the scene playing out before me as my curiosity was peaked. Luckily, the initial writing method switches into everyday prose before the generic phrases cause the audience to lose their grasp on the plot. Once the themes emerge, such as that of communication, or lack thereof, the work really develops into a nice piece.

This show consists of four one-act plays: "Generically Speaking," "Waiting for Goodreau," "Out of Order," and "The Caregiver." All are written by Robert Homeyer who performs in them as well. Each of the four acts has central characters who appear in each others' scenes. First is a scene between a man and a woman. Their relationship throughout the first act is a roller coaster of disconnection until an ex walks by at a restaurant. Homeyer really captures the essence of interaction. In the second act we observe two men at odds in a waiting room. As their personalities clash, tensions mount. After intermission the third act introduces us to two men working at a law firm as they each transition through times of hardship and success. Last, but not least, was my personal favorite of the night. Two women, one young and one older, are coping with emotions while in a hostage situation. Both have bouts of panic, introspection, and self-pity.

Between the eight actors the show spans a wide range of talent. There are those who captured my attention and refused to relinquish it while at other times I had to stop myself from groaning audibly. Fortunately the fun and interesting moments outweigh the others. Watching the story unfold there are twists present in each act's plot. Neither my companion nor I were able to pick up on them all, leading to regular chuckles and intakes of breath.

Three of a Kind with Two Wild Cards describes itself as “equal parts sketch comedy, melodrama, juggled timelines and theater of the absurd.” With a script that enlightens us to the fact that we can take control of our lives, Homeyer reminds us that it is important to remember that we have the capability to evolve and better ourselves. This show's ticket prices won't break the bank; it's worth spending the fifteen dollars for a great cerebral prodding.

(Three of a Kind with Two Wild Cards plays at Theater for the New City, 155 First Avenue between 9th and 10th Streets, through December 1, 2013. Performances are Wednesdays through Saturdays at 8PM and Sundays at 3PM and 8PM. Tickets are $10-$15 and are available at theaterforthenewcity.net.)