By Catya McMullen; Directed by Kate Middleton
Produced by Ground UP Productions 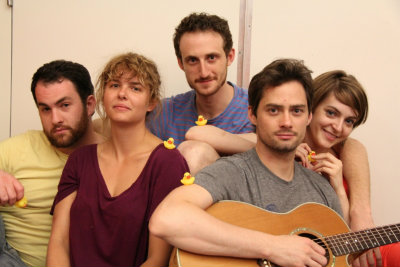 BOTTOM LINE: The One Where Al Dies.

What does it mean for a play to fall into the category of a “sitcom?” It’s a classification increasingly given to plays throughout the years by critics, audiences and theater makers alike. Critics liberally used this term to describe Tanya Barfield’s The Call at Playwrights Horizons this past year. I believe it’s problematic for several reasons; most importantly in that it’s considered a negative attribute. Also, the sitcom format was originally inspired by American naturalistic plays of the mid-twentieth century. Lastly, it’s an outdated term because the sitcom format is rapidly changing, becoming more complex and cinematic.

Therefore, I will not call Catya McMullen’s new play Rubber Ducks & Sunsets directed by Kate Middleton (not one in the same as her royal impregnated highness) a staged sitcom, but I will point out that it has all of the trappings for that term to be prescribed to it by a lesser critic than I.

The conventions employed by McMullen that may draw this criticism include incredibly short spurts of scenes, predictable relationships, zinger-laced dialogue, elaborate comedic setups, young self-involved characters and a static apartment/home setting where all action occurs. While the characters and situations she draws upon resemble everything from “Seinfeld” to “Girls” to the movie “Garden State” (including the therapeutic shouting session), they are often still believable, honest and interesting. My primary issue is with the overt pettiness of the characters which is perhaps all too human, but in McMullen’s script they never truly realize a bigger world than themselves within this Brooklyn cocoon of an apartment.

Rubber Ducks begins after the funeral of a young respected gay photographer named Al. Al was famous enough that after his death he’s being given a spread in Vanity Fair. The quartet of superfriends is now a trio: this includes Al’s boyfriend Walter (JD Taylor), and his friends Eli (Josh Evans) and Casey (Anna Stromberg). Added to this mix are Al’s sister Amy (Christine Mottram) and his personal assistant Petey (Zac Moon). Throughout the course of this play we learn how each of these twenty-somethings had a unique relationship with Al and we witness some impetuous sparks as they pair off together. And then there are those rubber ducks, which get a personal concert from Walter on his guitar nightly. The rubber ducks had a large part in Al’s death, although it’s somewhat ambiguous to the point that it could be chalked up to a quirky detail for the sake of quirkiness. Ultimately we learn very little about who Al truly was as a person, and why we should care about his legacy -- knowing this could make it easier to put up with his friends in their quarter-life crises.

On the page, McMullen’s witticisms are often delightful. She is clearly a smart playwright, and one to keep an eye out for as she recently won a Samuel French short play competition. Her characters in this play say the darndest things, like a friendly competition between Walter and Casey of “Would you still be my friend if…” with hypotheticals like: “If I wore a helmet during difficult conversations?”, “If I watercolored my feelings”, and “If I exfoliated with falafel.” While Taylor and Stromberg come up with wonderfully playful deliveries for each of these -- it’s a fine example for the play overall as an overload of clever ironic banter. McMullen is not aided by Middleton’s brisk and rushed pacing. With no time to breathe, it’s a relentless assault of idiosyncratic phrases making what could’ve been a spontaneous coping mechanism between loving friends a well-rehearsed presentation of funny actors delivering jokes. It seems like McMullen is after something deeper as she explores how young people first deal with an unexpected death of a loved peer.

Each actor in Rubber Ducks has moments of exquisite simplicity, humor and vulnerability. Moon’s performance as Petey is consistently and welcomingly understated, but McMullen’s setup of Petey ranting to a box of Al’s stuff pulls the rug out from under Moon’s sensibilities. Stromberg and Evans play the loudest characters as they toggle the line between impulsive and exasperating.

Set designer Travis McHale’s Brooklyn apartment is picture perfect. The immersive and masterfully detailed set in the small Gene Frankel Theatre space only adds to the demand for thoughtfully fleshed out characters which are only sporadically delivered throughout the play. Amanda Jenks' contemporary costumes are both fashionable and tell you almost everything you need to know about each of these characters.

In a sitcom series we can perhaps deal with characters stuck in adolescence throughout several episodes for the sake of comedic situations. However, we eventually want to see them grow up. In a play like Rubber Ducks we only have two hours to spend and there needs to be a faster transformation. As the play ends now with Eli asking “Where do we go from here?” we are left with the trio of friends still caring about little more than their own images and insecurities.

They are there mostly to entertain each other throughout the play, and they often entertain the audience as well. We all do crazy irrational things when coping with death. However, at some point you would hope that these characters might come out the other side a little better for it with a broader scope on life.

(Rubber Ducks & Sunsets plays at the Gene Frankel Theatre, 24 Bond Street between Bowery and Lafayette, through July 27, 2013. Performances are Mondays at 7PM; Wednesdays through Fridays at 7PM; Saturdays at 2PM and 7PM; and Sundays at 2PM. Tickets are $18-$25 and are available at groundupproductions.org or by calling 800.838.3006.)