By Julien Schwab; Directed by Nicholas A. Cotz 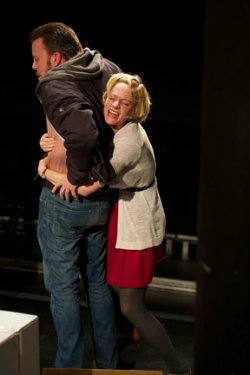 BOTTOM LINE: rogerandtom is an unforgettable juxtaposition, like Inception and The Twilight Zone meeting Abbott and Costello.

rogerandtom is a comedy incorporating simple jokes with complex ideas. Initially the audience watches Penny (Suzy Jane Hunt) and Richard (Richard Thieriot), a married couple at the end of their relationship. Richard is in the process of moving out amid Penny's waves of contrasting emotions. (She even puts back on her wedding ring prior to his arrival.) We find out that Penny is bringing her alcoholic brother Roger (Eric T. Miller) to her other brother Tom's play. Roger and Tom have not spoken in years and when Roger is brought into the show, the whole dynamic is altered. Instead of sitting in the audience with us, he is horror stricken to find out he has been written as a part in the script. Thieriot, as Richard, breaks out of character to become William and convinces Roger to play along with the show for Penny's sake, assuring him that his estranged brother Tom will eventually emerge from backstage as incentive. Breaking the fourth wall time and time again William/Richard and Roger put Penny through an emotional roller coaster. The thought-provoking and hilarious events are in constant supply as the production progresses.

Hunt, Miller, and Thieriot were all spot on during the performance of rogerandtom that I saw. In fact, it seemed as though the parts were written for those specific actors. All are believable and captivating, participating in such a well-oiled machine of a production. I found myself wishing I could watch each actor simultaneously, as well as the astounding and ever-expressive vein in Hunt's neck. Due to the stage setup that is difficult, but director Nicholas A. Cotz is obviously extremely experienced at his craft. The layout of the space is in three sections: A sandwich of audience, stage, and audience, with the opposite sides of seats able to see one another. The stage mimics that which you might see in a game of the Sims for a blueprint of an apartment. Walls are imagined with a combination of vertical wires and tape on the floor. Despite the light at many points giving us the opportunity to see fellow audience members, Cotz keeps the actors placed where they demand our attention and earn our focus.

I would jump at the chance to see more of playwright Julien Schwab's scripts performed. His knack for writing could draw most anyone into the world he has created. I believe people from all walks of life can find humor in his work. Many sections of the play are commentaries on theatre itself and the “disease” of wanting to be an actor; I could relate to these on a personal basis being an actress myself. The writing is extremely down to earth though, so even though those with some connection to the world of theatre might have a more complete understanding and appreciation for the jokes, there is material for everyone incorporated into the actions and dialogue.

My one dilemma with the show was that at times I felt overwhelmed by the layers of characters and what was or was not reality for Penny, Richard, and Roger. Both the 2004-2010 television show Lost and the 2010 feature film Inception utilize ideas of multidimensional layers, but they incorporate a constant, otherwise known as a “totem” or “anchor” in the specific references. Initially I latched on to Penny's commitment to the play within the play as the constant, yet rogerandtom goes so far as to even break that construct. My brain was reeling with all the information my cerebrum was required to process, yet despite the fact that the audience is given the opportunity to stretch their brains and come to realizations on their own, it is a relief when Schwab includes explanations to make sure everyone watching is on the same page.

What a surprise I had while watching rogerandtom. Normally I watch shows straight-faced, yet throughout this production I repeatedly found myself smiling. I am confident those of you who take my advice to buy a ticket will experience similar results.