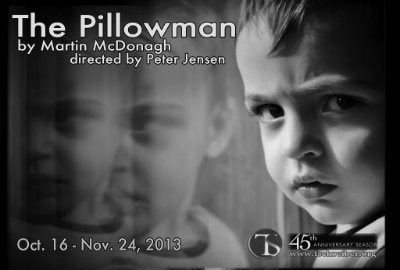 BOTTOM LINE: One of the most provocative plays of the 21st century, in a production that does it as much justice as it was done on Broadway.

The original Broadway production of Martin McDonagh’s The Pillowman will likely remain one of my favorite evenings of theatre for the remainder of my life. The darkness of the play, along with its bizarre sense of humor, both shocked and entranced me throughout. Now presented off off Broadway at T. Schreiber Studio and Theater, the show doesn’t lose any of the punch it packed on the Great White Way. Under the expert direction of Peter Jensen and with an exquisite cast, I’m tempted to state that it could be the best evening of theatre this fall that I’ve seen.

Raising questions about censorship, art, and the very fabric of humanity’s perception of right and wrong, The Pillowman is definitely a hefty piece. Katurian, a writer of short stories, the majority of which involve young children being brutalized, is being interrogated in an unnamed totalitarian police state by good cop/bad cop duo Tupolski and Ariel. Children have been turning up dead in the town, murdered in ways that mimic his mostly unpublished collection of tales. The only other individual familiar with the stories is Katurian’s mentally handicapped brother Michal, simultaneously being interrogated in the next cell. With a multitude of twists and turns along the way, The Pillowman constantly confronts the very notion of truth versus fiction while being both compelling and more entertaining than such gruesome subject matter would indicate.

Josh Marcantel as Katurian has some big shoes to fill, as his role in the original Broadway mounting was portrayed by Billy Crudup, who may just be one of the best stage actors of our time. Marcantel fills those shoes admirably, inhabiting Katurian with a spellbinding intensity. Don Carter’s dry delivery of Tupolski engenders guilty giggles from the audience throughout, and his own little short story in act two is delivered to perfection (perhaps even better than Jeff Goldblum did on Broadway). Tommy Buck as Ariel is both terrifying and empathetic. But the strongest performance comes from Alexei Bondar, who embodies Michal with every aspect of menace and purity possible while never speaking down to the character. Basically, these four leave nothing to be desired, and I for one would have been pleased as punch to pay Broadway prices to see them devour this material.

While elements of the scenic and lighting design definitely have the off off Broadway feel, the performances of the leads described above elevates the evening above typical off off Broadway fare. This may be harder for anyone who caught the original production to abide when it comes to the acting-out of some of Karturian’s more brutal tales. However, it plays just fine for the uninitiated and the performances of the principals still make it worth a visit for lovers of the piece. I’d easily see it again myself. (Although I should point out the number of times I utilize adjectives like ‘brutal and ‘gruesome’ above – this is not a play for sensitive souls).