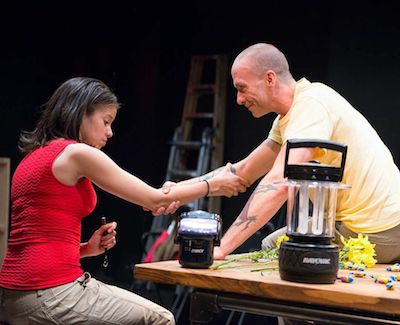 BOTTOM LINE: Far more than an “activist play,” Pirira is a deftly beautiful merging of script and staging that shows how intelligent collaboration can make for wonderful theatre.

I don’t believe I have ever seen a play set in Malawi. I am certain I have never seen a Malawian character perform a rap in both English and Chichewa (the two official languages of Malawi). Certainly Pirira is worth seeing for this alone, since there are unfortunately very few plays that either take place in sub-Saharan Africa or else depict the people who live there with any degree of specificity, let alone authenticity. Yet to reduce Pirira’s value to the filling of a cultural gap would be to ignore much of what makes it so compelling, both in terms of its dramatic power and its societal intervention.

Pirira works on multiple levels. For those who like some activism with their theatre, Pirira is consciously engaged in advocating for social change (as one character says, “The opposite of poverty isn’t wealth, it’s justice.”) The play was developed and produced by Theatre 167, a Queens-based theatre company whose mission is rooted in collaborative process, civic dialogue, and a diversity of voices (the name refers to the number of languages spoken in Jackson Heights). And playwright J. Stephen Brantley works in some subtle, often humorous social critique throughout the play, in order to point out the frustrating limits of NGOs in developing countries and the persistence of racial and cultural stereotypes in the US. For example, early in the play a white gay man asks his co-worker, a recent immigrant from Malawi, “Have you seen The Lion King?” as if the American sincerely believed this was a relevant and useful portrayal of “Africa.”

But I wouldn’t saddle Pirira with the label “activist play” since it is far more than this. Or perhaps its true activism works on a deeper level—Pirira is primarily concerned with dramatizing the ways humans can connect across cultures and across geography. It does this through an ingenious merging of Brantley’s script and director Ari Laura Kreith’s staging, a combination that is clearly the result of some serious collaboration between the two (Brantley has stated as much in interviews).

Pirira takes place in two places simultaneously—in the stockroom of a New York City flower shop, and in the storeroom of an NGO in Lilongwe, Malawi. One end of the rectangular space grounds each of the two locales, and a long table down the middle is used in both. In New York, Chad (the gay man mentioned above) gets to know fellow employee Gilbert (the student recently arrived from Malawi), who soon evidences his own insensitive gaps in awareness. On the other side of the world Jack and Ericka, two Americans working for an NGO (non-governmental organization), hide out from the violence of the protests that took place in Malawi on July 20, 2011.

Over the course of a brisk 70 minutes, the two couples struggle to connect across their respective differences. All four actors are excellent. Todd Flaherty is wonderful at playing the well-meaning, directionless Chad. Flaherty’s emotional vulnerability provides crucial nuance, so we eventually see Chad as far more than that familiar stereotype of the gay white man whose deep investment in US-American LGBT politics brings with it a profound ignorance of anything not directly connected to gay rights (like any awareness of a culture not his own). Adrian Baidoo plays Gilbert; Baidoo’s masterful quiet intensity suggests there is far more roiling underneath Gilbert’s surface, much of which, due to the uncertain status of immigrants in the US, Gilbert may never reveal. As Ericka, Flor De Liz Perez shows strength and power playing a woman who is starting to learn that not everything is under her control; Perez does a terrific job with steadily building Ericka’s growing frustration. And playwright J. Stephen Brantley plays Jack, the experienced NGO-worker who spends a lot of his time futilely relaying the same pipes for water. As an actor, Brantley is an expert at playing roles that call for a butch yet sensitive masculinity; his Jack is perhaps the strongest performance in the show.

As the action moves between the two couples, events in one location are regularly paralleled in the other, often in surprising ways. There are overlaps in dialogue and repetitions in the staging, from large blocking choices to small gestures. The lights turn off in both places, yet for completely different reasons. Music is performed at the same time in both, in a synchronicity that is as subtle as it is beautiful. And this synchronicity is far more than just a clever gimmick—it occurs throughout the text, staging, and design (especially Brendan Flaherty’s set and Josh Benghiat’s lighting). More importantly, it is foundational to the message that Brantley and Kreith are advocating—that it is the little things that can help us connect. At the end of the play, after revealing what “pirira” means (it's a Chichewan word, but I won’t spoil it here), the four characters physically get close to each other for the first time during the play. This final stage picture is a simple yet effective button on this subtly powerful play.