Midsummer (A Play with Songs)

Written and directed by David Greig
Songs by Gordon McIntyre 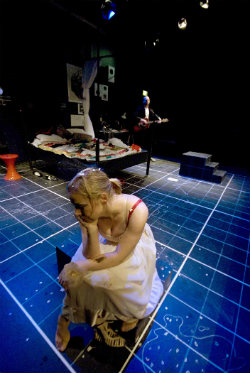 Cora Bissett and Matthew Pidgeon in MIDSUMMER.Photo by Douglas Robertson.

BOTTOM LINE: An exhilerating import from Edinburgh that will delight most any audience.

So rarely is a transfer from the Edinburgh Fringe Festival actually a piece of contemporary Scottish theatre. In Midsummer (A Play with Songs) we get a sharply produced modern romantic comedy set against the backdrop of the city of Edinburgh. The production comes from the fifty year-old Traverse Theatre in Edinburgh, an incubator for new work in the region. All of the essential Scottish elements are at play: rain, booze and acoustic guitar. For those unfamiliar with the city, a handy map of references comes with your program, including the local Ikea.

At a glance the play has the look of another story from a nearby isle in Once. Like that play, the songs (lyrical and emotional tunes by Gordon McIntyre) are lifted out of the story in such an unimposing way, as though you’re strolling through a pub listening in on conversations amidst a boozy acoustic set.

The play is written and directed by David Greig. There is a sense that it was lived by Greig as well. The astonishingly versatile actors Cora Bissett and Matthew Pidgeon take on the funny, self-deprecating Helena and Bob, while also stepping into third person narration throughout. It is evident quickly why Bissett won The Stage Award for best actress when this play premiered in 2009. Her vocal dexterity and natural exuberance on stage is contagious. It allows us to fall into this wild and cheeky "boy gets girl" journey with the perfect amount of irony.

While not an adaptation, there are certainly references in Greig’s script to Shakespeare, such as a Japanese bondage club known as “A Midsummer Night’s Cream.” Also, we have a main character named Helena. Like the Athenian Helena, the modern version is always the bridesmaid and never the bride. Beyond that, it’s more the evocation of what pure uninhibited folly can happen on a midsummer night. It’s a classic “one hell of a night” story akin to Scorsese’s After Hours. In this world, the more money that comes to these luck-starved heroes, the more danger and adventure follow.

Bob is a lonely 35 year-old petty criminal who spends his free time at pubs reading Dostoyevsky to make himself “feel happy.” Helena is an alcoholic with a complicated love life who longs to be a mother but can't get her life together. She keeps her nephew’s stuffed Elmo doll in her bed allowing for some hilarious intimacy complications. Even as narrators, our characters have self-preservation tendencies from the start. Greig does a lovely job at complicating our trust of these storytellers as they disagree over the details.

When Bob can’t deposit dirty money into the bank account to pay off his mobster boss he is at rock bottom. Helena is there too after showing up late to her sister’s wedding and getting vomit on her nephew. Chance encounters and a little bravery put these two back together for a night worthy of our gentle Puck. On the longest day of summer they linger, as Helena puts it: “floating on a tiny patch of night in the middle of a great sea of day.”

Greig throws every low budget theatrical convention into the mix including audience participation. It manages to keep this oft-told story fresh. His nimble direction creates rapid shifts and ingenious moments of silence. While Georgia McGuinness’s scenic design of a bedroom works exquisitely at poignant moments, the large bed center stage adds perhaps too much serenity to otherwise dangerous moments in the play at other times. Her minimalistic addition of references to the story strewn about the set creates an interesting mind map on stage, though.

Greig’s ending is tidy, and maybe not expected because it is what is expected. Nevertheless, these characters have earned it and avoid unearned sentiment. Midsummer is most certainly a treat in the aural and visual sense. It will impress with talent, ingenuity and heart. It’s a perfect island of Scottish summer vacationing in our New York winter.