Off Off Broadway, Play
Runs through 7.27.13
The Brick Theater, 579 Metropolitan Avenue, Brooklyn 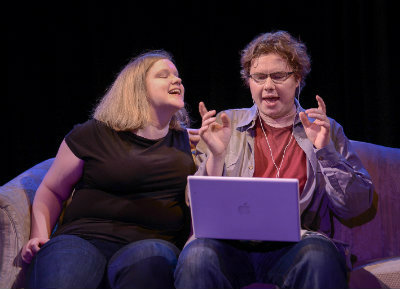 Multiplayer games and their all-consuming tendencies are on display in Mac Rogers' Ligature Marks, now playing at The Brick's Game Play Festival 2013. This two-hander stars Rogers himself as Terry, an ex-con just released from minimum-security prison and trying to figure out his next moves. He is coincidentally (though not really because she was stalking him) picked up by his ex-girlfriend Jill (the versatile Rebecca Comtois) on his release date while trying to catch a bus out of state. But instead Jill convinces Terry to come back to her place, to relax and enjoy a bottle of his favorite beer. Terry reluctantly complies and is quickly reminded why he broke up with the overly energetic Jill in the first place.

All Jill wants is for Terry to stick around. All Terry wants is for faster internet so he can play Noir, the multi-player game that seems to be controlling his life. Jill agrees to upgrade to the faster cable package, and Terry agrees to stay for a month. When the month is up and Terry is ready to leave, real life and game fantasy collide in an act of absolute desperation, as Jill gives Terry an ultimatum. What follows next is the unfolding of what would happen in the game if the real-life stakes became fictionalized. As the deeds are done and the worlds further intertwine, the truth gets muddier as well.

Rogers' program notes talk about his love of the noir genre, with often unsympathetic morally depraved characters. Though Ligature Marks is a comedy by definition, it borrows heavily from noir in its theme. The computer game and subsequent real-life game play uncover heinous choices and warped decision making as desperation grows. Though it might not seem like gaming and noir necessarily go together, Rogers deftly blends the two.

Jill and Terry's relationship sets us up for intrigue, and Rogers does great work setting up the circumstances of their back story to keep us grounded as the tale gets warped. Director Jordana Williams wisely balances the tone making sure we can never anticipate just where the play will go. Ligature Marks packs a lot of convoluted plot points into its tight 75 minutes. Maybe it was the oppressive heat of the day that was keeping my brain from performing at full capacity but I found myself confused at times, especially as the stakes grew. The tangential worlds might benefit from some added distinction, or I might benefit from not relying so heavily on my mental processes on toasty summer days. Or maybe confusion's the point -- the blurring of the worlds -- keeping us wrapped up in this twisted noir-influenced descent.