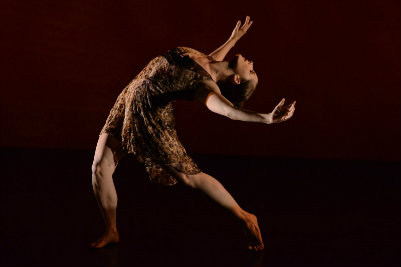 Jenny Gilan performs IT'S A GAME.

This last Thursday kicked off the thirteenth season of Amanda Selwyn Dance Theater with It’s a Game. It was an evening-length work that was playful and well danced, the stage at moments sprinkled with glowing orbs, chess pieces, fuzzy dice, and playing cards. The piece was inspired by the Alexander McQueen fashion show at the Metropolitan Museum in the summer of 2011 and a quote by Deng Ming Dao from the program states “the cultivation and mastery of a game is not merely for the acquisition of skills, but it is a path to the innermost part of a person’s being.” There were three sections which all had at least four subsections. Part one was “Transformation,” part two was “Game Theory” and part three was “Radiance.” At one point, the transformative lighting by Dan Ozminkowski dictated the squares of a chess board reminiscent of, but not copying, the McQueen show. The dancers moved the chess pieces around the space creating a space to dance within them.

It’s a Game started out well with highly articulate dancing from the six dancers moving glowing orbs in a meditative manner, but the subsections of the first section were disrupted by moments of the house lights coming up. We jumped right back in, but the pace was brought to down a few beats. At its best moments, the dancers ate up the space with strong lyrical unison phrases. There was nice chemistry throughout the cast and it seemed that they really were playing a game with each other. When there were smiles, it lit up the entire stage. The agile dancers made easy work of lifting both women and men. Emily Pacilio's dancing was impressive and showcased just how versatile she is. I just saw her perform with RG Dance and it was fun to see different vocabulary with the same voice. Jenny Gillan’s limitless back and thrashing solo lends an ounce of spunk to the show, and the two men, Victor Larue and Randall Anthony Smith, were particularly outstanding with their painterly strokes of movement and long lines.

The costumes by Anna-Alisa Belous were inspired dresses for the women and black shirts and pants for the men for "Transformation," white for "Game Theory" where they were moving like pawns through the space, and litmus test like short unitards to finish off with "Radiance." They involved luxurious looking fabrics, textures and really added to the movement.

The music was by 14 different composers/bands including original music by Tito Ramsey (which specific sections I cannot be sure of). The transitions were seamless between and showed the grace of a well put together show. At the end, Selwyn recapped all three sections and it felt refreshing to watch the entire piece over again in fast forward. It was a well appreciated moment since the subsections were as specific as "Face off," "Check Mate," "Moving Square," "Roll the Dice," and "In the Cards." Often, people go to modern dance and don’t “get it” or remember what they saw a few minutes ago. I feel that Amanda Selwyn pushes forward making dance more accessible and It's a Game evidence of that. I was happy to see a dance show based on the Alexander McQueen fashion show which is in tune with NYC culture. Amanda Selwyn Dance Theatre performs again on July 13, 2013 in the East Hamptons.

Warning: include(http://www.theasy.com/includes/footer.php): failed to open stream: no suitable wrapper could be found in /nfs/c03/h03/mnt/169650/domains/theasy.com/html/Reviews/2013/I/its-a-game.php on line 163