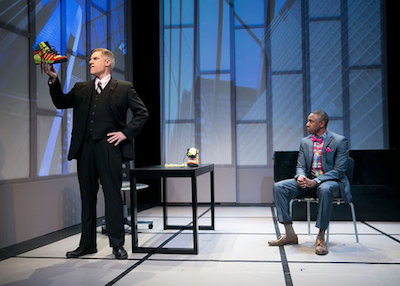 BOTTOM LINE: A smartly written comedy with a surprisingly bizarre plot and a strong cast that addresses many facets of racism in America.

When hearing about the latest production of Greg Kalleres's Honky at Urban Stages, I assumed it was a stirring drama dealing with racially charged issues. I could not have been farther from the truth. Kalleres has created a shockingly wacky look at race triggered by the very serious event of a young black teenager being shot for his trendy new tennis shoes. The designer of the shoes feels responsible, the creator of the commercial for the shoes feels responsible, the CEO of the shoe company feels entitled and wants to exploit the rent to make more money, a therapist just wants to do her job, and a privileged fiancé just wants to feel something. Kalleres has created a world in which white and black guilt, hallucinations of a drunken Abraham Lincoln, a salmon-eating foul-mouthed Frederick Douglas, and a pill that will cure you of all your racism woes all coexist in a strangely humorous manner. While the plot often might not make a whole heck of a lot of sense, you don't really care. The audience goes with Mr Kalleres as he leads his characters down a path to "cure" racism with a new experimental pill and to hopefully find happiness in this often confusing racially charged landscape of America.

Honky deals with some pretty serious issues. In a world where everyone tries so hard to be politically correct, are we, in fact, still perpetuating racism? If you acknowledge that there is racism, are you, yourself, a racist? Should we be doing something about the terrible things happening in parts of Africa? Do different races have "different" problems, and if so, is it all right to address them? Can someone be too white or too black or not black enough? All of this in a fast-paced, intermissionless comedy nonetheless. Who would have thought?

I could say more about the plot but I think that the questions that Honky addresses are for more important. As stated previously, the plot might leave something to be desired but the bigger questions posed are far more intriguing. The cast gives some oustanding solo performances while navigating the touchy subject matter. Dave Droxler as Peter, the ad executive who wrote the ad for the shoes that are so popular they're worth killing for, is a true standout. He negotiates the awkward pauses and meandering thoughts with great ease when addressing his black female therapist, played by Arie Bianca Thompson. Thompson shows a cool, sexy confidence with a bit of neuroses bubbling under her seemingly collected surface. DeLance Minefee also stopped the show with his over-the-top portrayal of Frederick Douglas.

Urban Stages brought back Honky after a successful run earlier this year and I am glad that they did. Will everyone enjoy this slightly madcap comedy with dramatic undertones? Maybe not. Those who are overly sensitive about racial slurs and slightly socially uncomfortable situations might not enjoy this production, but those who can lighten up a little will no doubt enjoy themselves and have a lot to talk about afterwards. I liked this play so much more than I thought I would. It moved quickly, kept me laughing throughout, and made me think. What more could you want? While it is a solid production that has already seen one remount this year, I don't know if there is a place for Honky beyond the intimate venue at Urban Stages. So if you have the time and want to see some interesting new American theatre, check out Honky at Urban Stages before it is too late.