The Glory of Living

Off Off Broadway, Play Revival
Runs through 8.18.13
The Access Theater, 380 Broadway 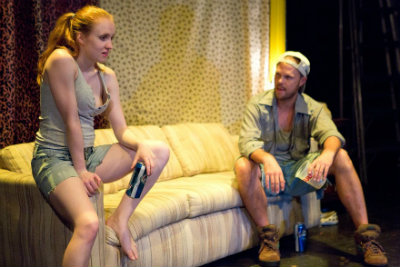 Hannah Sloat as Lisa and Hardy Pinnell as Clint in THE GLORY OF LIVING. Photo by Hunter Canning.

When the first scene of a play features a fifteen-year-old female character sitting on a worn out couch talking with an older man while her mother has intercourse with his friend in the next room, you know you’re in for some heavy material. Rebecca Gilman’s Pulitzer Prize-nominated play, The Glory of Living, takes a darkly comic journey through a few years in the lives of two serial killers. This production successfully combines vigorous acting, crisp direction, and engaging design elements to create an intriguing and thought-provoking theatrical experience.

Lisa (Hannah Sloat) is fifteen years old when she meets Clint (Hardy Pinnell). Lisa’s mother is a prostitute and her father is long dead, so when she meets Clint, a charismatic redneck complete with teeth grills, it’s easy to see why she willingly runs away from home with him. Her story spirals downhill from there as she and Clint get married and embark on a life moving from motel room to motel room, kidnapping, raping, and murdering victims. A fascinating and well-crafted part of this production is that we don’t witness any of this onstage – yet it doesn’t make the play any less graphic, as brutal descriptions of Lisa and Clint’s offstage actions are given throughout the play. That being said, The Glory of Living is full of extremely tense moments that also manage to be strangely comedic, despite their content.

As the story unfolds the play dives deeper and deeper into the psyche of Clint and especially Lisa, exploring what would drive people to behave like this. Gilman’s dialogue is expertly written. It’s crude and blunt, yet Lisa and Clint live in subtext. At one point a lawyer repeatedly asks Lisa why she killed her victims and her only answer is “I don’t know.” She really doesn’t seem to know, and yet her motivation must come from somewhere. Sloat shines in these moments. She plays Lisa with incredible subtlety and intrigue. The chemistry between her and Pinnell is evident from the start and despite the atrocious acts committed by these two characters, it’s still hard to look away thanks to the powerful performances of these two actors.

The supporting cast does well highlighting Lisa and Clint’s brutality, including a standout performance in the second act by Stephen James Anthony, who plays one of the victim's boyfriends. Director Ashley Kelly Tata infuses the show with energy through her well-choreographed scene changes complete with southern rock – it’s like being at some kind of punk rock concert with flashing neon lights, graffiti all over the set, and actors dumping trash around the stage to set the scene. As Lisa and Clint travel from motel room to motel room the space changes slightly until the second act where the entire set is transformed into a stylized interrogation room. Every piece of this production fits perfectly together into the dark, uneasy puzzle that is Lisa’s life. Gilman’s play asks some tough questions, and this production doesn’t shy away from any of them, leaving the audience with much to think about, including the show’ s haunting final moment. The Glory of Living is dark, funny, and bold. It is a show packed with heavy material, delivered by strong actors, and led by a director with a consistent vision.

(The Glory of Living plays at The Access Theater, 380 Broadway (at White Street), through August 18, 2013. Performances are Thursday and Friday at 8PM, Saturday at 2PM and 8PM, and Sunday at 2PM. Tickets are $18 and are available at brownpapertickets.com. For more information about the show visit thegloryofliving.tumblr.com.)