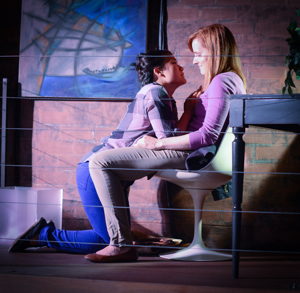 Living in New York City, we have all had our fair share of strange, creepy, or perhaps slightly deranged neighbors. We live next to each other wondering if the other can hear what we talk about or what we do. When we meet in the hall, there is a courteous nod of the head with a mumbled, "good morning," as we hurry our way out of the building. Some neighbors we become friendly with, invite them into our homes, and discover an unexpected bond. In Mac Rogers' new play Frankenstein Upstairs a couple experiences just that: an unexpected bond with a strange woman who challenges everything they know.

The moment I arrived at the theatre, there was something bizarre brewing. Unfortunately, The Secret Theatre had lost all electricity in the theatre. The irony of the power going out right before a play about Frankenstein was quite thrilling. Perhaps a neighbor was working on a...project? Eventually, they were able to get work lights on and assembled a computer/ipod system to play sound. (Sadly, I was not able to hear Jeanne E. Travis' sound design or see Jennifer Linn Wilcox's lighting design.) All involved handled this complication extremely well and everyone in the audience seemed happy to be a part of such a unique experience.

The show opens with couple in the midst of a "SWOT" self-analysis (Strengths, Weaknesses, Opportunities, and Threats) in their DUMBO apartment. Immediately we are aware of their stark differences. Sophie (Autumn Dornfeld) is organized, serious, and focused. Marisol (Diana Oh) is scattered and jesting, barely paying attention to her girlfriend. Interestingly, I felt as if I were in the studio audience of a sit-com: the laugh lines are well placed, the conversation crisp and clever, and the characters easily accessible. We learn that the two women are self-employed social media experts who work — and live — very differently. They love each other, but there is something deep down that is disrupting them both. This jagged bliss is further complicated by the arrival of their upstairs neighbor, Dr. Victoria "Vic" Frankenstein (Kristen Vaughan) whose "work" routinely causes the couple's power to go out. Vaughan plays a mysterious and slightly frightening woman who turns their world upside down. This sit-com begins to get weird.

In Mary Shelley's Frankenstein, the story is not only about a man animating a creature made from corpses, but about what it really means to live, to love, and the influence of the people we choose — or don't choose — to surround ourselves with. The age-old metaphors are seen in the trials and tribulations of Sophie and Marisol and the people they include in their lives. Marisol's gay best friend, Taylor (Rob Maitner), exudes the loyalty and love of friendship. He is a vibrant romance novelist who just so happens to be blind. (But, Alas! He seems to be the only one who can actually see!)

Amongst the fun brassiness, Maitner is completely lovable and endearing. Oh's spunky and sensual tomboy was fun to watch in contrast to Dornfeld's worried and sincere girlfriend who seems to be wallowing in the silent agony of insecurity. And Jordana Williams' direction is comfortable, yet, at times, surprisingly jolting.

Mac Rogers is a major player in the indie theatre world, specializing in bringing sci-fi, thrillers, and dark comedies to the stage with a distinct voice and style. Old meets new and dead becomes alive. Apple products are seen in juxtaposition to old leather-bound notebooks and women play roles previously held by men. Rogers has borrowed a quilt passed down from Shelley and developed his own: the stitching is carefully placed, and each square — perhaps splashed with blood — seems to have a purpose. It sure does take a while, but once complete, the quilt stays with you for quite a long time. As the character Taylor says, "I want them to know we can write about each other. I want them to know we can know each other." Ultimately, Rogers is successful at writing and knowing. He has developed a new play that energizes an old story that will never die. The bond of love is tested to the limit, but at the end of the play, the two women look at each other and know, "It's alive!"