Tickets can be ordered by calling 212.244.7579 or going to www.signaturetheatre.org

The Dance and the Railroad

By David Henry Hwang; Directed by May Adrales 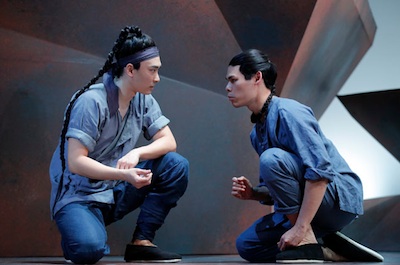 BOTTOM LINE: A terrific new production of Hwang's second play, performed for the first time in 31 years, explores the exploitation of Chinese immigrants brought to the U.S. to build the Transcontinental Railroad during the 19th century.

Since its founding, the U.S. of A. has captured the imagination of impoverished and adventurous people the world over. After all, its streets are said to be paved with riches and even its nickname, Gold Mountain, seems to beckon the tired, poor and tempest tossed.

Lone and Ma, the protagonists of The Dance and The Railroad, are both young Chinese immigrants who came to the US in the 1860s, ostensibly to help build the Transcontinental Railroad. Lone had previously studied to be an opera singer, dancer and actor—that is, until his parents unceremoniously yanked him out of school and sent him to America to help support his starving family. He’s been laboring for three years and despite backbreaking work on a construction crew, he refuses to let go of his theatrical ambitions. Each night, he ignores his carousing coworkers and practices alone.

18-year-old Ma (Ruy Iskandar), in the U.S. for just four weeks, has seen Lone (Yuekun Wu, in a stand-out performance) and begs for training because he, too, has theatrical aspirations. Since the laborers are on strike—“The white devils try to stick us with a 10-hour day,” Ma says, “Eight-hour day good for white man, eight-hour day good for Chinamen”—at least for the duration of the work stoppage, he has plenty of time to train and practice.

Lone’s response is icy and he expresses his refusal to take on a protégé in no uncertain terms. Bitter and full of rage, he cannot believe that this idealistic upstart has what it takes to endure the rigors of daily rehearsals and muscle-pulling dance moves. He also seems to have no desire to be either a role model or mentor to the younger man. Suffice it to say that a battle of wills, with some pithy and surprising turns, ensues.

At its heart The Dance and the Railroad addresses what it means to have personal integrity and retain one’s humanity in the face of misery and want. And while the play is not overtly political, the Chinese workers’ exploitation, by bosses eager to squeeze every ounce of strength from them, is blatant and reminds the audience of the necessity of unions to promote decent working conditions and fair pay.

That said, this is the story of two men who simply wish to prosper without losing their cultural identity. Their struggle includes moments of both humor and pathos. Indeed, at the start of the play Ma’s teenaged idealism is heartfelt, if absurd—he fantasizes about returning to China in a gold sedan chair, accompanied by 20 wives—and gives Lone ample fodder for jest. At the same time, his descent into cynicism is heartbreaking, even as a bit of his youthful optimism rubs off on the sullen Lone. It’s quite moving.

Mimi Lien’s simple set—a bunch of angular platforms meant to evoke a mountaintop—allows both actors to leap and tussle, showcasing the play’s precise choreography. Jiyoun Chang’s lighting design is a perfect complement, shifting day into night and brilliantly transforming the enticing gold sunlight into a dank, dark workplace. In addition, an original score by Huang Ruo adds drama, but does not overwhelm the two-character ensemble.

(The Dance and The Railroad plays at the Alice Griffin Jewel Box Theatre at the Signature Theatre, 480 West 42nd Street, through March 24th. Performances are Tuesdays at 7:30PM, Wednesdays at 2PM and 7:30PM, Thursdays and Fridays at 7:30PM, Saturdays at 2PM and 8PM, and Sundays at 2PM. Tickets are $75, and $50 for partial view. Tickets can be ordered by calling 212.244.7579 or going to www.signaturetheatre.org.)