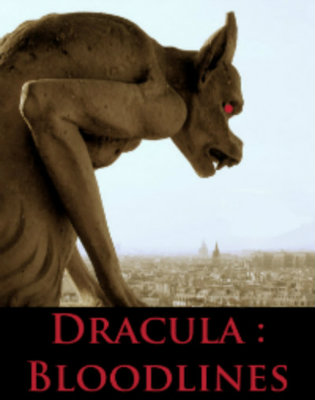 It’s obvious from the start that Dracula: Bloodlines was made with a great deal of love. I say this as an excited albeit nervous writer/director tells the audience the known history of Dracula before the show begins, thus setting the scene: "now, 120 years later, citizens of New York City have started having recurring dreams involving vampires."  This includes Morris Harker, great great great grandson of Jonathan. The nightmare is serious, albeit extraordinarily campy, and I can’t help but grin as this is the kind of show that I would write and produce myself.

With that in mind,this play is not a life-changing adaptation of Dracula – although I’ve seen a myriad of Dracula film adaptations that are far less entertaining. But it is something that true horror fans will get a similar kick out of. The cast are all extremely committed and I can’t help but think this is in no small part due to writer/director Thomas R. Gordon. Everyone seems to be having quite a good time going for the jugular as it were, and as a result, the audience seemed to as well.

The plot itself begins as though we are simply repeating Bram Stoker’s story with a different cast of characters. But Gordon takes a few leaps beyond this by positing that in the original tale, Dracula’s soul was in fact driven out of its mortal coil. So now Dracula exists in a kind of spirit limbo and sends his minions out to feed in his stead. It’s all a bit far-fetched, but allows for a few amusing sequences where the vampire brides use riddles to trick unwitting victims into their clutches. It all leads to a ritualistic bloodbath (joyfully, there seem to be buckets of it backstage) where Dracula is of course conquered once again… or is he?

The production design definitely sets the piece in its own altered version of modern reality. In particular the costume design is bizarre – a mixture of the modern and the Victorian in a type of goth-punk vein. The characters also speak in a mixture of modern and archaic dialects. Along with the deft choice of incidental soundtrack, this all comes together to help dispel some of the more awkward moments of the production as simply a bit ‘off.'

While I enjoyed myself heartily, I would suggest that Dracula: Bloodlines is definitely a piece with a very niche audience. It would be easy to apply adjectives such as silly, melodramatic, and the like to this production. But in the end, I would much rather have a flawed if enjoyable vampire story than one that either tries to be too serious and borderlines on dull (like the recent Dracula musical) or is so silly that even the real Dracula would blush (as in the ill-fated musical Dance of the Vampires). I always approach horror in theatre with a mixture of hope and fear, and this show managed not to tip the scales too far in either direction.

(Dracula: Bloodlines plays at the Gene Frankel Theater, 24 Bond Street, through September 8, 2013. Performances are Thursdays through Saturdays at 8PM and Sundays at 1:30PM. Tickets are $20, $10 for students, and can be purchased www.brownpapertickets.com. For more information, visit www.theonomatopoeiatheatrecompany.com.)