Written and Performed by Richad Marsh and Katie Bonna; Directed by Pia Furtado
Presented as part of Brits Off Broadway 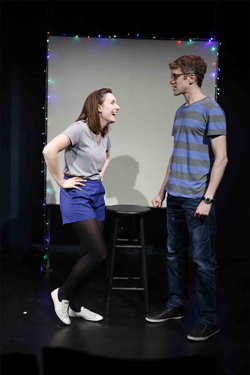 BOTTOM LINE: An electrifying duo tells the hilarious events following their one night stand using both poetry and prose.

Everyone on this earth has done something they regret. That is a fact. Our experiences shape us though, and sometimes to our chagrin our regretful incidents are necessary to lead us to bigger and better things. This show is executed brilliantly. That is another fact. With a minimalistic set and highly skilled actors (also the playwrights, Richad Marsh and Katie Bonna) who have obviously received wonderful direction by Pia Furtado, Dirty Great Love Story displays a regret that a few too many people have experienced: a one night stand. Then again, perhaps this is one of those stepping stones on the path to future happiness. I’ll let you be the judge.

Following the intricacies of Katie and Richard’s relationship the audience is transported on a journey from clubs and barbecues to festivals and a christening. The characters meet while at what the Brits call stag and hen dos, which in the states we commonly refer to as bachelor and bachelorette parties. After a one night stand as a result of instant chemistry and inebriation, Richard is smitten as Katie insists she must leave. Despite awkward experiences, there is an unseen force that draws the two toward each other. It shocks Katie as she tells us “This guy is not my type, at least not ordinarily, But there’s something about him that’s compelling me.” With every new event they run into each other though their relationships with others teeter between single and taken. Richard is a sweet and geeky character who never forgets that Katie cannot eat wheat, while Katie cannot seem to forget about the hot jerks in her life who constantly disappoint. The audience at the show I attended was splitting their sides with laughter throughout the entire performance as the characters interact with each other, as well as their ridiculous yet endearing friends (all played by Marsh and Bonna).

One of the most jaw-dropping aspects of the production is the script, referred to as a poetry-play. Marsh and Bonna not only created a captivating story, but sections of text that could win spoken word competitions. Early on in the story when Katie is noticing Richard at the club she says, “CC is draped, ape-like, round my neck / Decking me out in her regrets... Over her shoulder I can see / That guy, wrapped in his own piece / Of human jewellery,” demonstrating the novel imagery and thought put into the writing. Granted, just reading the text on a page does not do it justice. It is in the performances that they manipulate the words so whether they are acting sections that are prose or those that are poetry the flow of ideas and sounds caress our ears, open our eyes, and cause us to excitedly anticipate the thought of what might come next. The actors justify transferring into heightened speech in the form of poetry as a result of the fact that normal speech does not suffice to express their emotions accurately.

Dirty Great Love Story has traveled to us from across the Atlantic Ocean and we must thank the United Kingdom for relinquishing such a gem. Richard Marsh and Katie Bonna are the marvelous duo who not only perform the show, but wrote the words themselves that captured the attention of our ears and our hearts. Combined with director Pia Furtado’s impressive work it is no wonder that they had sold-out runs at the Bristol Old Vic, Soho Theatre and Theatre Royal Bury St Edmunds. It is certainly a story for an adult crowd since it lives up to its name of being ‘dirty,’ but as a woman in her twenties I find the suggestive and sexual humor quite appealing. If I had the financial means, I would pay to see all the remaining performances of Dirty Great Love Story.