Off Off Broadway, New Play
Runs through 8.3.13
The Gym at Judson, 243 Thompson Street 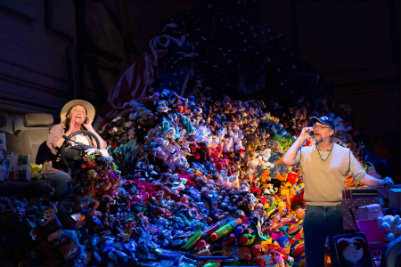 Dale Soules and Hugh Sinclair in THE CAPABLES. Photo by Hunter Canning.

BOTTOM LINE: Fully realized characters are beautifully brought to life in this clever new dramedy about a hoarder and her family.

Anyone averse to clutter will feel immediately anxious upon setting foot in the cavernous Gym at Judson space. Think flea market installation art -- heaping piles of detritus are everyone. But the more you look the more you see that it's actually organized chaos. Happy Meal boxes here, stuffed animals there, a pile of baskets, a tower of VHS tapes, umbrellas, dolls, books, and more.

Jay Stull's The Capables examines a complicated matriarch and the toll her hoarding (collecting, in her eyes) takes on her family. Anna Capable (Dale Soules) is a God-fearing Southern woman whose daughter Jessy (Katie Eisenberg) has encouraged the family to appear on one of those reality shows about hoarders. Though Jessy is 25, she lives at home and cares for her mother and sickly father Jonah (Hugh Sinclair). The weight of this world is squarely and unfairly on her tiny shoulders.

Enter the TV crew, as appalling a portrayal as you'd expect from a biting comedy such as this: producer David (Charles Browning), social worker Jennie Bragg Marcus MSW (Jessie Barr), and crew members Mike (David J. Goldberg) and Tommy (Micah Stock). Their entire objective is to facilitate the emotional narrative that reality TV audiences have come to expect, with zero regard for the Capable family and their real life struggles. Opportunistic and dismissive, their unfriendly demeanor plays interestingly in contrast to the naive authenticity of Jessy and her folks.

The play's structure is framed by the episode itself; though we are behind the scenes for most of it, voiceovers and lighting changes remind us that what we're seeing in the moment will eventually be presented in its edited format. Anyone familiar with reality TV (and at this point aren't we all?) will recognize the construct: one-on-one interviews, the specialist giving her professional opinion candidly to the camera, the dramatic underscoring when shit's about to get real.

The Capables soars in its affecting characterizations. Stull's writing and Stefanie Abel Horowitz's direction provide a full and nuanced understanding of the characters, and exceptional performances by the entire cast give us fully realized and complex people. Though everyone in the cast is on point, it's worth mentioning Stock, as Tommy, and Eisenberg, as Jessy, who infuse their characters with the perfect amount of quirkiness to keep them genuine and unexpected.

Where The Capables falls just short of incredible is in its length and drawn-out plot unraveling. Many of the scenes are two-handers, and many re-hash what's already known. A flashback involving the meeting of Anna and Jonah decades earlier is hilarious but feels like it's from a different play. Dana Berger and Max Woertendyke give strong performances as the younger versions of the now aging couple, but then we never get to see them again. Though this scene provides a bit of payoff, it takes us away from the world in which we're already so invested. And I would have enjoyed some more closure at the play's end, as I was left to wonder what happened to these people I'd grown to care about.

Still, it's worth it to spend your evening with The Capables. The play shines light on worthy subjects and offers an interesting vantage point to a narrative you've probably seen at home on your TV many times before. Though fictional, the play is every bit as affecting as reality TV intends to be.

(The Capables plays at The Gym at Judson, 243 Thompson Street, through August 3, 2013. Performances are Tuesdays and Wednesdays at 7PM; Thursdays through Saturdays at 8PM; and Sundays at 7PM. Tickets are $18 and are available at smarttix.com or by calling 212-868-4444.)