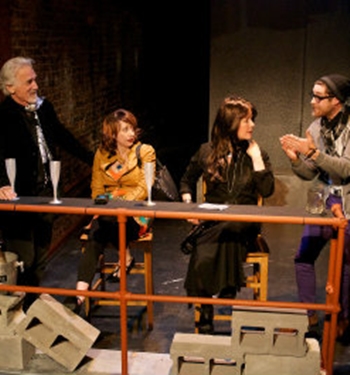 BOTTOM LINE: This well-acted and well-staged production explores the problems one faces when they depict their personal life in their art.

Chemistry of Love explores the inherent problems that occur when an artist attempts to plumb their personal life and the lives of those closest to them for relevant artistic material. At the center of the play is Lara (Kim Merrill), a mixed medium visual artist, who is nominated as a finalist for a $500,000 grant. She celebrates in a bar with her friends Karen (Jennie Vath), Tyler (Matt Baxter Luceno), and Florant (Dennis Parlato). Things get complicated when Lara drops her grant nominee check in the toilet of the bar bathroom, Karen takes photos for proof, and Tyler and Florant see the photo as potential art. Lara will want to use this as fodder for her grant submission whereas Karen will want to use the photo to jump start a career as a photographer. Tensions also rise when it is revealed during the barroom conversations that Tyler and Lara used to be lovers and that Tyler has a new art exhibit that documents their entire relationship.

Later, in the play’s most visually complex scene, Lara visits the gallery where Tyler’s art installation depicting their relationship is exhibited. Interestingly, the actors reenact the video scenes on display while Lara is shown watching the exhibit from nearby video monitors. In the taped scene Tyler gets Lara drunk via a beer bong to the point of vomiting and the footage shows her crying over Tyler’s lack of commitment and lack of appreciation for her art. The actors reenact the scenes over and over again at differing speeds, showing that the installation is showing the same footage over and over again in different ways.

Angered by Tyler profiting off of her vulnerability and their relationship, she is inspired to do the same and takes to taping her friends at their weakest moments and depicting them cruelly in her artwork. When Karen catches her taping their argument over her new career as an artist and her professional and romantic entanglement with Florant, she becomes enraged and severs their relationship. Later Lara learns a valuable lesson about the price one pays when they exploit others for the sake of their art.

Chemistry of Love is interesting in its exploration of the importance art can play in one's life and the conflicts that arise when one’s work exposes their personal life. The play’s use of video also makes it more visually appealing. Each actor is strong in his/her performance, especially Jenne Vath who convincingly portrays Karen’s extreme vulnerability and eventual emotional unraveling. The use of sound and music in the performance also helps the production maintain momentum. Directed by George Ferencz, Chemistry of Love is particularly well-staged, with the production successfully showing two scenes unfolding at once and a backdrop that opens up into a bathroom.