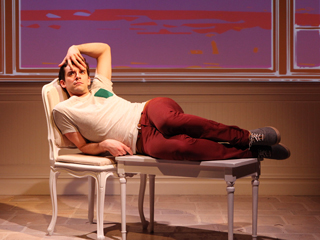 Michael Urie in BUYER AND CELLAR. Photo by Sandra Coudert.

BOTTOM LINE: A riotous fictionalized take on Barbra Streisand, as seen through her relationship with her newest employee, an unemployed gay actor.

The first thought I had after watching the lithe and very talented Michael Urie, who is on stage alone for 90 minutes, was what his fitness and diet routine must be for his yeoman effort playing the main character, Barbra, and various others, eight shows each week. Urie, best known for his role on the television show Ugly Betty, originated this role at the Rattlestick Playwrights Theater this spring and received a Drama Desk Award. Now it continues for a longer run in a larger theatre.

Playwright Jonathan Tolins, clearly a fan, uses Streisand’s 2010 book A Passion for Design as a jumping off point. Urie greets the audience with a copy in hand -- as The Way We Were plays -- and reads the jacket description. He explains that the play is clearly made up, whispering behind his hand that it would have to be, “given how litigious Barbra is.”

As envisioned by Tolins, the actress has a basement mall on her vast estate that is also home to a barn and mill, as well as chickens, which Urie’s character Alex encounters as he drives up for an interview. He’s out of work and Barbra is need of someone to look after the mall for the one customer, the most important one.

Alex is in charge of looking after the mall’s gift and dress shops, antiques store, and most significantly, doll shop. It’s there that “Barbra” finally pays a visit as The Way We Were again plays. Urie skillfully conjures both Alex and Barbra, cocking his head, employing a somewhat thick Brooklyn accent and contorting his face to emphasize her infamous nose and jaw line as we witness an exchange between him and Barbra. She pretends not to be herself and starts chatting with him as if she’d never seen the wares before. Alex notes her nails are so long it's as if they're saying, “I don’t play piano or write my own blog so fuck you!” She asks him about a doll and he realizes she’s testing him and he concocts a tragic origins story. Entertained, she plays along and finally asks for the cost. Alex, in a frenzied panic, notes that nothing has a price and makes one up. Barbra then tries to barter, and it’s hilarious watching Urie as Barbra, with full chutzpah, upping the stakes and then rapid fire, Alex’s amused and fascinated reaction to this game before she reveals her true identity.

Alex’s feelings about the mall are transformed and he suddenly loves working there, steadily becoming Barbra’s eager and cherished confidant, her telling him about unloving parents, her stage and film roles, her son and the storied boyfriends she’s had. It’s during these moments that Urie and Tolins take away the icon and touchingly humanize her, giving her true vulnerability.

Although the tickets are quite steep, Urie’s award-winning turn in multiple roles is well worth seeing, as is Tolin’s highly entertaining play.