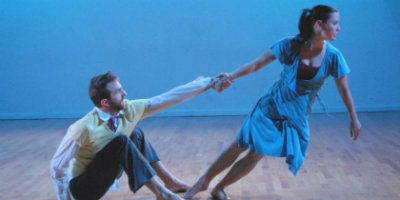 When I entered Triskelion Arts in Williamsburg, I was warned that this was not going to be a typical evening of modern dance. It wasn't. If this was an iTunes sampler of an era, this would be from the Deep Cuts album. The first piece, "Foiled Again," started the show off with a math test. It reminded me of how any trace of algebra had vaporized out of my mind. There were lots of on point cues from the teachers and there was a playful quality and a dynamism between the ensemble that made me laugh constantly. The only male/female duet consisted of acrobatic and dynamic partnering where either partner found themselves seamlessly suspended overheard. At one point the performers were counting aloud the numbers corresponding to the dance phrase. It created a beautiful sound score that layered over the music to show not only the craftsmanship of the steps, but the regimented quality and formula of solving a puzzle. The dance phrases throughout were quick, frenetic darting phrases and the dancers whizzed over and under the tiny chairs that were the props. The comedic dialogue tied together all the transitions seamlessly.

The second piece, "#64," danced to Fiona Apple's song "Hot Knife," was the bold exploration of a fugue reworked on 7 women. The burst of gestures, extreme musicality and twirling of skirts was a perfection combination. It was inventive and fun -- a visual painting of the music without being too literal. I wish it had been longer and developed into a piece that pushed the quirky and strong sensual quality of the women even more.

The third and final piece, "219 Gates," was a film showcasing the versatility of Radway's vision. It was a dance horror film that could have been called "The Dinner Party Gone Wrong." A beautiful house caged the dancers as they seemed suspended in the bathroom, kitchen, dining room and stairwell awaiting their fate. At first, the film had phrases and explored all sorts of levels. It was clear that it needed to be a film piece to see this moving sculpture from these rarely seen vantage points (from above was my favorite part). The lighting by Joel Garland and Carlton Ward and music by her brother Scott was quite exquisite for the film carrying the drama and anticipation of the piece forward. At its most campy moment, fake blood spurted all over a women's face and she wiped it from her brow and stood as a characted in a Hitchcock film contemplating her next move.

I liked that the evening was so varied and that Becky isn't afraid to use the pop music of the day. There was a contagious joy in every dancer there and a freedom and fun in the everyday. Becky has a talent for making those moments that we've all had in the classroom, listening to a favorite song and a dinner party seem larger than life and much more exuberant.