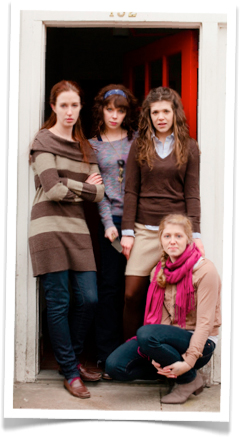 BOTTOM LINE: An oft-told story of siblings fighting over their childhood estate is helped by a cast of strong women actors, but hampered by an uneven script and inconsistent characters.

Looking through the program for Thirds, a premiere play produced by Heiress Productions now playing at the Lion Theatre, a question is raised before the house lights even go down: we have a brand new play written by New York playwright Jacob M. Appel, in which an “adapter” is also credited, Kevin Brewer. If this is a new, local script, what is the need for an adapter? This may account for the ultimate identity crisis of the script, which simultaneously aims for tearjerker and off-the-wall comedy, but rarely achieves either amidst zingers that fall flat, and heartfelt stories that only skim the surface of adding dimension to this world.

“Dividing the estate” is the central action for some of the greatest theatrical literature of all time: Chekhov, Horton Foote, Tracy Letts and so forth. It can prove a wonderful battleground for characters to show their true colors. When a family must fight over a house or a piece of land that each member feels a deep connection to (or doesn’t), conflicts often pull the masks off otherwise stable adults, and put the boxing gloves on. This is the territory Appel ventures into with Thirds, as three very different sisters need to decide what to do with their family home after the death of their loving, yet eccentric mother. The artsy youngest sister, Maya (Kelly Strandemo), begins the play with her plot to literally divide the home into thirds by building brick walls throughout the home. In addition, she wants to save money by turning off the water service and building an onsite water reclamation system which leads to several references to drinking one’s own bodily fluids. The eldest sister, Delilah (Leigh Williams, who adds impressive dimensionality to her character), is the only one with a family and a job and believes the logical course of action is to allow her and her family to move in. She does make a good case for her needs in a monologue about the chores of motherhood. However, it’s the middle sister, Olivia (Laura Faith), who the burden has been placed on in their mother’s will to decide how their childhood nest will be divvied up or sold. It is when the first buyer, a wealthy neighbor from childhood, shows up at the end of the first act that the play gains a conflict that rises above squabbling. Phyllis (a delightfully bi-polar performance by Jenna Panther) is willing to pay any price for this house, and ultimately their identity. Nevertheless, the end of the first act is a bit like dropping the chandelier for effect, only to come back in the second act to find out it was only lowered for cleaning.

Director Zac Hoogendyk and this definitively strong group of actors certainly keep the play clipping at a sitcom-pace. If only this house seemed more worth fighting for in Josh Zangen’s scenic design we might be more inclined to care about the outcome of it. For a play whose central purpose of being is the house on stage, this is a particularly sparse home with very little personality or connection for these sisters in terms of detail on the set. A few photos and knick-knacks which are never referenced come off as simply set decoration. Zangen is not aided by the lack of any textual references to specifics about this home. Stories retold are instead memories about their mother’s secret pen pal, General Westmoreland, one of the most interesting side revelations of the night that had me wishing I could have seen her character on stage to balance out the childish and repetitive bickering of these navel-gazing sisters.

Phyllis is a vital character in giving this play a leg to stand on, and Panther is superb at slowly unveiling her ulterior motives and mommy issues. Meanwhile, the three sisters are drawn on stereotypes, and are often too inept to be believable. For example, Olivia is painted as a flighty repressed librarian. Her “clueless girl” interjections often fall flat. Maya is apparently forever doomed to mooching and idleness due to her “only” having a BFA in art. Even the Yale-educated Delilah is given some eye-rolling lines like, “water doesn’t fall from the sky” in response to Maya not paying the water bill. This is precisely why the dichotomy with an interesting character like Phyllis never really clicks in this generally comedic setup. When everyone on stage is insane, there is no juxtaposition of opposites which makes laughter harder to come by.

(Thirds plays atThe Lion Theatre at Theatre Row, 410 West 42nd Street between 9th and 10th Avenues, through March 18, 2012. Performances are Wednesday at 8pm,Thursday at 8pm, Friday at 8pm, Saturday at 2pm, Saturday at 8pm and Sunday at 3pm. Tickets are $19.25 and are available at telecharge.com.)