Island; Or, To Be or Not to Be 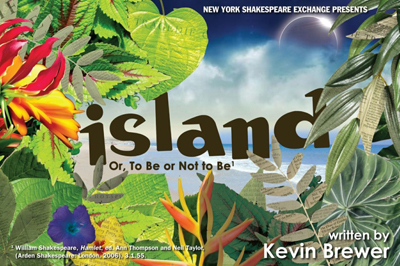 BOTTOM LINE: A Shakespeare mash-up that's comfortably contemporary and sure to please.

New York Shakespeare Exchange's Island; Or, To Be or Not to Be is a send-up to Shakespeare, or at least our contemporary idea of 16th century England. Kevin Brewer's hilarious script is wisely full of references that will charm fans of the Bard, but written in a way that feels very comfortably 21st century. The result is a fast-paced romp intent on entertaining.

On Island's island, King John (Eric Percivel) reigns. The rest of the small community is comprised of King John's son, 18-year old Prince Palamon (Brad Lewandowski), John's deceptively evil brother Lord Richard (Zac Hoogendyk) and a bevy of friends who have made their lives in this secluded place. Everything appears "Shakespearean" on the island, and the great poet is often praised, not to mention quoted (although the residents don't seem to notice that their words are not their own). When a 21st century shipwreck throws Julia (Katelin Wilcox) and K (Evelyn Spahr) on the island's shores, the inhabitants are forced to come to terms with the actual era in which they live, which it turns out is not the 16th century at all.

All of this unfolds within the framework of a Shakespearean comedy, and all the requisite traits are there: mistaken identities, young love that cannot be, a missing character and a reunification, and naturally, a happy ending. Add to this plenty of puns, physical comedy, and a generous allotment of bumbling and it's easy to buy into the authenticity -- maybe the same authenticity that keeps the citizens of the island disillusioned about their own circumstances.

Island's cast works tremendously well as an ensemble, and Ross Williams's direction keeps everyone (audience included) on a constant high. The energy and spirit are contagious, and it's clear that New York Shakespeare Exchange aims for everyone to have a good time. This type of comedy, so inherently British, is not easy to pull off by actors without ample physical comedy training (in the traditions of commedia dell'arte and farce). Though this cast does an admirable job, I have a feeling Island would thrive in the UK. That said, there are some wonderful performances, and it's worth mentioning Michael Shattner's Sir Pompy Martext, the malapropian local magistrate, and Leigh Williams's Asnath, the batshit crazy hermit. Both embody their ridiculous characters so sincerely that not a gesture or expression is ever overlooked.

Island's production values are high, notably Kristine Koury's costumes which are deliciously authentic and come together to make a very pretty palate during the final scene. The sound design includes live music performed by pianist Sophia Vastek that adds much to the ambience. Sets by G. Warren Stiles, lights by Daniel Winters, and props by Marissa Bergman are all well-designed and appear way more big-budget than it's likely they are. New York Shakespeare Exchange has done an excellent job staging this play. Whether you are a Shakespeare-phile or not, there is a whole lot to enjoy on this island.

(Island; Or, To Be or Not to Be plays at the Connelly Theater, 220 East 4th Street, through October 13, 2012. Performances are Tuesdays through Saturdays at 8PM, with a few 7PM curtains -- visit IslandThePlay.com for the complete schedule. Tickets are $18. To purchase tickets visit brownpapertickets.com or call 1-800-838-3006. For more show information visit IslandThePlay.com.)