Off Off Broadway, Poetry/Play
Runs through 1.8.12
The Wild Project, 195 East 3rd Street 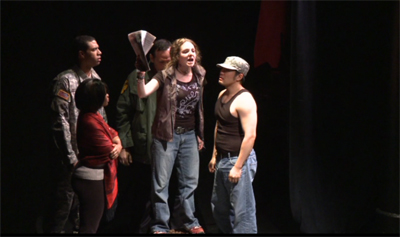 A scene from GOLIATH (from a previous production).

You know what sucks? War. You know who it sucks for? Soldiers and their families. In Goliath, a powerful one-act play, we see the pressure that surrounds fighting for one's country and the problems that arise when soldiers return home.

David (catch that biblical allegory?) enlists in the army after high school because he feels he has something to prove to his conservative, bigoted father. He finds his fellow soldiers and bosses to be equally conservative and bigoted. David participates in some stuff he regrets (deplorable, inhuman, torturous things to innocent Iraqis) and realizes that war has morally changed him, making him capable of awful things. It's hard to rejoin society after something like that.

Goliath tells this story through seven people's perspectives: David (Nabil Viñas), his mother (Monique Paige), his father (Kenneth Heaton), his young wife (Natalia Duong), his liberal sister (Samantha Cooper), his drill sargant (Dontonio Demarco), and his supportive best friend (Edgar Eguia). Through these vignettes, we see the toll David's experiences have taken on his support system. He withdraws and eventually removes himself from these relationships entirely. This talented cast finds the emotional strife in their stories without needing to comment on their circumstances.

This is largely due to Alex Mallory's smart direction. Obviously Goliath communicates a political perspective -- about the travesties of war and the toll war takes on those brave enough to fight -- but there is never any political comment imposed on the play. Instead, the characters' stories speak for themselves and the audience is able to interpret things individually. As a result, Goliath avoids that agitprop, anti-war trap and instead lets the story feel authentic.

Goliath is a piece of poetry (and it's now being presented in The Poetic License Festival, which offers a line-up of new poetic theatre). Written by Takeo Rivera, I'm sure it reads as well as it plays on stage. However, Mallory's visceral staging is almost more choreography than direction, and the lines are often spoken by more than one cast member and delivered in a style that lets the ensemble breathe as one being despite seven individual perspectives. This story is well-suited for its theatricality and could probably go further in exploring its creative storytelling opportunities.

After a production last summer and much acclaim, it will be interesting to see where Goliath goes next. Unfortunately, you only have two more times to catch it at The Wild Project. Goliath is a stylized piece of theatre, unique and affecting. It's well worth checking out if you get the opportunity.