By the Steps Reportory Ensemble

Off Off Broadway, Dance
Steps on Broadway, 2121 Broadway 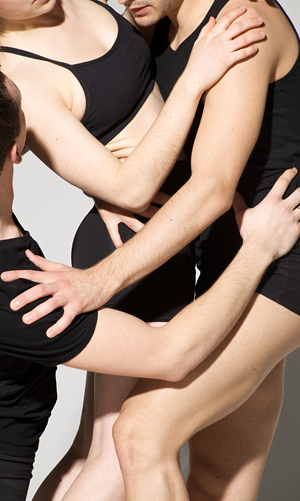 BOTTOM LINE: Ensemble on Ensemble was an invigorating presentation by the up-and-coming generation of dance artists.

Ensemble on Ensemble evolved as a way for the Steps Ensemble to explore creating their own pieces using fellow ensemble members. Initially, the ensemble members each created a solo piece featuring another dancer, then over the summer they began work on a larger dance piece. These pieces were rehearsed, explored, and finally presented to an audience September 28 and 29, 2012 as part of the Steps on Broadway’s ongoing “Steps Beyond” program. Steps Beyond “embodies the philosophy that Steps on Broadway is a studio for professionals, and for dancers training to be professionals. Its missions is to connect dancers with the wider artistic community by providing opportunities to translate and interpret their daily dance training into performance, and to gain access to people working in the industry.” Eleven exciting new dance pieces premiered in September featuring both the members of the Steps Repertory Ensemble and a sprinkling of guest dancers. It was an invigorating presentation of new works by a diverse range of voices.

The evening kicked off with Emily Schoen’s Banjo Suite, a goofy, whimsical jamboree set to blue grass tunes and structurally modeled after a ballet. The more dramatic Movin On followed, choreographed by Jessica Dunham as a point/counterpoint between a lead character and two backup performers. The stronger characterization of the lead dancer (Clara Belenus) was emphasized by the corresponding vocal lead in the accompanying Velvet Revolver track. The next choreographer Gabriel Malo drew from his Brazilian heritage for It May Not Be Here, which employed a stronger narrative than the previous two and mixed pedestrian and heightened movement. It May Not Be Here also showcased tender partnering by Marielis Garcia and Ricky Kuperman. Following this, Clinton Edward’s Lovefool employed the most theatrical presentation of the night, with distinct characters, conflicts, and a neat costume design. The show began with a solo reminiscent of commedia energy, moved to a slapstick dueling duet, and closed with two emotive solos. The close was awkward in terms of the arc of the piece, but was emotionally lovely. Ricky Kuperman’s Tit for Tat ends the first part with a resounding triumph of masculine aggressive energy, athletic prowess, and visual acumen. Tit for Tat employs primarily strong, direct, and bound efforts, cleverly utilizing time effort for variety and dynamics. The piece is rich with unexpected body shaping, weight sharing, and highly successful visual choices (both in design and staging). Tit for Tat was both thoughtful and exciting—it is clear why it was an audience favorite.

Returning from intermission, the second half began with Marielis Garcia’s Courage, full of circular pathways and shaping among other universal symbols of the feminine. In Courage, a clear statement is made when the unison movement shifts to individual, self-focused phrasing for each dancer, and then returns to a freer form of the original unison style. Romp by Lane Halperin followed, a flip, fun duet featuring a playful interchange of both personality and bodies that plays strongly to the strengths of both dancers (a sign of a clever choreographer). Victor Larue’s La Vie en Rose came next, a loose and gooey, precocious, tongue-in-cheek solo to the music of Edith Piaf. Kyle Mullins’ And They Move Us followed, attempting “an expansion of style and scope.” Mullins delves into ideas of wonder, exploration, and curiosity and his movement was intricately aligned with the music. Throughout the piece, even though the three dancers don’t interact, they are unified by the structure of the piece and the movement, then in the end burst into a climactic phrase of unison dance which descends to a beautiful final vignette. The penultimate performance was Conflict by Clara Belenus, a sexy, hip, darker performance with a clear clean execution of style which featured a stunning collaboration between dancers Clara Belenus and Ricky Kuperman. The night ended with Modnar is Random, an intricate piece of polyglot styles by Mindy Upin for the whole ensemble. Satirically silly, aesthetically exciting, and kinetically impressive, Modnar is Random serves as Williamsburg’s answer to “The Rich Man’s Fugue.” Upin’s work belies a fabulous sense of irony, and a presentation and energy that brought down the house and closed the night with a bang!

Ensemble on Ensemble was one of many performances in Steps on Broadway’s fantastic programming. To find out about the next thrilling presentation, visit www.StepsNYC.com.