Written and performed by Tali Brady; Directed by Bruce Lambie
Part of the 2012 Frigid Festival 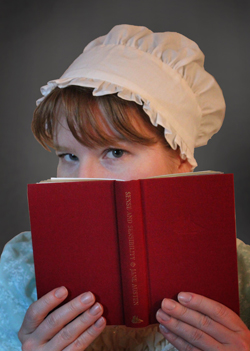 “I’m dead,” Tali Brady’s Jane Austen announces at the start of Afternoon Tea with Jane Austen. “But I think it’s time I told my own story.”

So she does, along the way denouncing biographers who either ignored her literary endeavors or who made them the sole legacy of her 41-year life. Austen’s quick wit, sarcastic tongue, and wry commentary about late 18th century British society — to say nothing of her penchant for gossip — shine in this hour-long reflection.

“I was inspired to do this show because I adored the works of Jane Austen, but realized I knew precious little about the woman herself,” Brady writes in the show’s program. “So I decided to learn about the woman behind the words.”

The result is funny, moving, and quirky. One of eight children, Austen’s dad was a well respected, if financially insolvent, clergyman, her mother, an oft-ailing poet with a flair for the dramatic. Brady presents Austen as especially devoted to her sister Cassandra, her best friend and confidante, and the person who, more than anyone, encouraged the aspiring novelist to commit to the written word. Brady presents Austen not only as a deep thinker, but also as a woman who loved parties, flirtation, and dancing. She turned the heads of several young men, she boasts. One broke her heart. She rejected another.  “I did not and could not love him,” she confides. Worse, she ultimately feared that wedlock would stifle her creativity. Would she have been able to devote herself “to the pen,” had she opted for marriage and motherhood? she wonders.

Brady highlights the fact that when Austen’s books were published — first Sense and Sensibility, followed by Pride and Prejudice, Mansfield Park, and Emma — the title page simply listed the author as “a lady.”  Despite this obvious slight, the books were popular, she gushes, and allowed her to become a woman of independent means, no longer dependent on her brothers for financial support. The change suited her.

But it was not to last. Sadly, by 1816 the author’s productivity was limited by illness — fatigue and pain of unknown origin. “I refused to give in,” she reports. “I started another story but never finished it. I knew my condition was serious. Nowadays, people think it might have been cancer.”

Nearly two-hundred years later, Austen says that she is still rankled by her passing because her brother Henry’s eulogy did not mention her writing. Later, her nephew penned a memoir about “Dear Aunt Jane.” Looking straight at the audience, Austen recounts her dissatisfaction with both accounts—after all, writing was what gave her life meaning.

Afternoon Tea With Jane Austen rectifies these omissions and introduces a sassy, spirited, and quietly defiant feminist foremother. Presented as part of the frigid New York Festival, Brady’s tight script and forthright delivery are spot on. Austen was revolted by what she called “pictures of perfect.” Brady‘s presentation of a real human being — flaws and all — would likely have pleased her.