Tickets are $18, available at Ovationix

Off Off Broadway, New Play with Music
Runs through 8.7.11
The Wild Project, 195 East 3rd Street 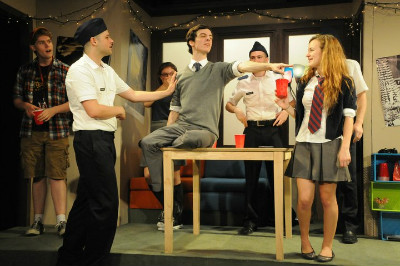 BOTTOM LINE: A joyful and endearing production with catchy music and that will transport you back to your high school days.

High school: don’t you remember that period of your life with a mix of both horror and nostalgia? The bustle of emotions and the desire to be cool (or at least to fit in) while prancing around with the latest gadgets in the hope that someone will notice. The discovery of the opposite sex as something truly intriguing; the innocence that led us to more uncomplicated friendships. That sense of not being understood by anyone and the personal rebellion against the seeming absurdities that life presents. So you can imagine my intrigue to find that Little Town Blues, a modern take on Chekhov’s Three Sisters, was set at a prep school somewhere in the middle of Iowa and that I was about to witness the struggle of an eclectic bunch of high school kids trying to figure out their purpose in the world.

Little Town Blues tells the story of three friends, Molly (Rachel Buethe), Olivia (Becca Ballenger) and Christina (Bianca Crudo) and their life experiences. Their daily interactions with their fellow students and friends from the neighbouring military academy is charmingly played out with a hefty dose of music, song and dance. While Molly, Olivia and Christina each have a distinct personality and character, they all share in common a deep sense of friendship, the feeling that any learning is futile if you’re still in Iowa and an intense emotional depth that will lead them to have more-than-your-average-kids-worth of situations to deal with. The play is essentially a tragicomedy, or rather a comitragedy divided in two parts, the first being a light hearted, hilarious introduction into the lives of these kids, while the second submerges them into the grief of a series of tragedies and the inevitable uncertainty that accompanies the end of high school.

There are several things about this play that really captivated me. Firstly the acting was just phenomenal, with the young cast credibly portraying the interactions, joys and alienated sentiments of a group of high school kids in a boarding school dorm. While almost everyone from the talented cast delivered consistent performances, Sean Patrick Monahan fabulously embodies Chet, one of the more interesting characters of the play, who spends much of his time spitting out facts and reading aloud about current events, and then wondering what's the point of it all. He mixes both humorous wit and a privileged intellect with a subtle vulnerability -- an iPhone-handling, Iowa-bound Holden Caulfield, if you will. This cast can also sing and it’s simply hilarious to see how an ordinary scene is transformed into a high energy musical number with a rapid dimming of the lights, spotlight on the singer and the entrance of two guitarists from the side doors, only to be transformed back with the same speed once the song is over. The corny lyrics of the songs, the somewhat ridiculous dances and amusing poses of the actors and the ease with which the kids utter naïve phrases like “I love the complexity of your eyes,” or “I’ve heard there is not a single Christian in New York,” make this play heart-warming and endearingly cheesy, much to the credit of director James Presson.

The second part of the show starts with a fire burning down some of the school buildings, an event that represents the rapid transition from the fun, joyful atmosphere of the first half into the more tragic events of the second (it is based on a Chekhov play, after all). In Chekhov’s original plot the two men contending for the love of one of the sisters, decide to challenge each other to a duel, with the corresponding death of one of the suitors. And while the writers Rachel Buethe and James Presson decided to keep this part in Little Town Blues, it does not really transfer well into a modern high school version of the play. And this inevitably rubs off on some of the acting during this scene, which I felt was less credible than in the rest of the play.

In spite of the tone-shifting, tragic events toward the end of the piece, Little Town Blues is a really fun show and will have you in side-splitting laughter for much of the time. It is an intense and high energy production -- the great acting and the lively songs along with the intimate atmosphere of The Wild Project theatre will make for an unforgettable summer evening. And at 18 bucks a ticket, it’s definitely a steal.