By Patrick Marber; Directed by Alan Gordon
Produced by The Seeing Place Theater 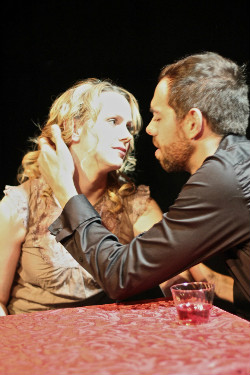 Romantic love and monogamous relationships are shown to be corrupt, ephemeral states in this performance of Patrick Marber’s well known work Closer. While many theater companies of a smaller size choose to perform original and relatively obscure works, The Seeing Place makes the ambitious choice to bravely tackle a work well known both on Broadway as well as on the silver screen.

As is the case with any play that exists as a film, it is hard not to draw comparisons to its cinematic sibling, seeing perhaps Jude Law or Natalie Portman in place of the actors on the stage. However, for fans of the film, the play is still worth a gander, especially since the final scenes show a completely different resolution, giving it a completely different overall tone from the film.

The play centers on Dan (Brandon Walker, who serves as artistic director for The Seeing Place), a 35 year old obituary writer in London stuck in a passionless rut. After a chance meeting with a young hit-and-run victim named Alice (Elyse Fisher), he brings her to the emergency room where sparks begin to fly between the two. Alice is plucky and assertive, boldly swiping Dan’s apple and ordering him to call in sick to his joyless job to spend the day with her. Her magenta hair and thirst for adventure seem to be an antidote to the relative grayness of Dan’s existence. Dan seems only all too eager to toss aside his current girlfriend in favor of a more exciting prospect. Soon however, the play skips into the future and we see Dan being photographed for the cover of his new novel, a novel which is entirely based around Alice’s unusual life story. As the photographer Anna (Erin Cronican, who serves as managing director for The Seeing Place) snaps photos, Dan becomes increasingly flirtatious, finally unbuttoning his shirt and pulling her in for a kiss. Anna balks, knowing that Dan has a girlfriend.

Later, still tormented by his desire for Anna, Dan poses as her in an online sex chatroom, luring Larry (Nick Velkov), a dermatologist, into meeting her. (While the chatroom lingo may seem a little dated, it was very timely when the play was written in 1997.) Dan poses as a cartoonish exaggeration of a heterosexual male fantasy, pretending to be a sex crazed buxom blonde. As chance would have it, Larry finds the real Anna at the aquarium Dan gave as a meeting place. Despite Anna initially being off put by both Larry and the prank, the two soon become romantically entwined. What comes to follow is a breakdown of relationships due to infidelities and Dan’s ever-changing whims which lead to the women being passed back and forth.

In this staging, in particular, both women seem powerless and unable to save themselves from being hurt and pushed around by the men’s infantile sexual and romantic whims. This may be due in part to the fact that actress Erin Cronican brings a greater vulnerability to Anna than I have seen in past performances. Her soft toned delivery and wide eyes show Anna to be a well meaning woman who can’t save herself from the imposing will of men. When she cheats on Larry with Dan and then on Dan with Larry she hardly seems responsible for her behavior. Both men are shown to be infantile creatures unable to transcend their basal whims. Dan can never stay interested in one woman for long, always looking for someone more exciting. Whereas Larry cannot rise above his animalistic sexual urges, willing to risk meeting a stranger off the internet for sex, sleep with a prostitute while married to Anna, and visit strip clubs. Despite seeming to be the strongest character at times, Alice proves to be the ultimate sacrifice, giving her being away as an artistic muse to Anna and Dan, and then giving her body to both Dan and Larry, and still wanting Dan even after his repeated betrayals. In this world, opening yourself up to love and sexual connection only means opening yourself up to greater pain and destruction.

Overall the performances from the cast were strong, carrying the script’s unfolding emotions strongly enough for the story lines to remain completely riveting. The show’s use of background music, consisting mostly of 90’s tunes from Portishead and The Cardigans, works well to reflect the overall mood of the play as well as add momentum to such scenes as Larry and Dan’s online chat during which almost the entirety of dialogue and action consists of text typed onto a screen. Thanks to both well-timed music and convincing performances, the play had not a single dull moment.

Elyse Fisher gives a standout performance, showing a well-executed mix of vulnerability and stoic strength as Alice. Brandon Walker believably embodies a man easily driven astray by his sexual whims. Erin Cronican’s performance gives Anna enough vulnerability for her to be an entirely sympathetic character. However, Nick Velkov could use a little more volume and energy as Larry, though his performance gained needed momentum by the show’s second half. His British-ish accent also seemed to fade in and out, a sharp contrast to the authentically Londoner accent expressed by Walker as Dan.

The show’s minor imperfections seem inconsequential when one considers the fact that tickets for this quality performance cost a mere $10, a bargain compared to the regular ticket price for a Broadway show (or even an $18 Equity showcase). The Seeing Place Theater company is certainly one to keep an eye on for affordable tickets to high quality shows.

(Closer plays at ATA's Sargent Theater, 314 West 54th Street, 4th floor, through October 9, 2011. Performances are Wednesday through Saturday at 8PM and Sunday at 5PM. Tickets are $10 and are available at smarttix.com or by calling 212.868.4444. For more show information visit seeingplacetheater.com.)