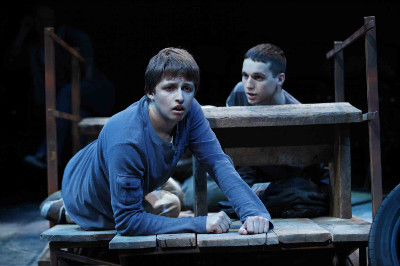 Will Roland (left) and Bryan Fitzgerald in THE BUS. Photo by Carol Rosegg.

BOTTOM LINE: A big city play about gay teens that hopes to open the minds of small town audiences. If any play can do it, this is the one.

The Bus is a new play with big aspirations. After its October run in New York, the 59E59 Theater production will travel to Topeka, Kansas, with the explicit goal of holding performances in the hometown of the notoriously anti-gay Westboro Baptist Church. After that, the play’s creators are hoping to stop over in a few more Midwest cities with similarly established institutions. With so much at stake, The Bus is a definite case of “go big or go home.” If New York, the theater capital of America (if not the world), is going to send a play out there to act as vigilante in communities with reputations for being hostile toward gays (and I mean really hostile -- like, protesting at funerals hostile), then that play ought to be an exceptional piece of theater, both in the story it chooses to tell and the way it goes about telling it. It ought to be theater magic.

Thankfully, The Bus is theater magic.

The plot focuses on Jordan (Bryan Fitzgerald) and Ian (Will Roland), two teenage boys who have a secret romantic relationship that is limited to late-night rendezvous in an abandoned bus. The same bus also serves as a roadside advertisement for a mega-church called Golden Rule. Meanwhile, Ian’s father (Travis Mitchell), is on a quest to move or destroy the bus, which sits illegally on the lot of his gas station. As suggested by the title, the bus is a major player in the story, serving both as a refuge for the gay youths and as a symbol for the kind of monopolistic power that the church has in town, where even the law officers are more committed to the church than they are to enforcing property rights. James Lantz’s script is a neatly wrapped dramatic package, but the web of connections between the sub-plots does not feel forced. Instead, it realistically highlights the tight-knit feeling of rural American communities -- which can feel more like claustrophobia if you don’t fit in (which is not only exemplified by the gay teens, but also by Harry, the unreligious business owner).

This solid story is portrayed by an equally solid cast. Fitzgerald and Roland have a stage chemistry that is believable and sweet, but also riddled with the discomfort of its secrecy. This is particularly palpable during their fumblingly awkward love-making scenes, where Ian can’t help but feel that they are always about to get caught. Mitchell and Kerry McGann also deliver strong performances as Ian’s parents, as does Robert Nuner as Sloat, Harry’s elderly mechanic.

The most influential character, however, is the Little Girl (Julia Lawler), who operates as both a character (Jordan’s little sister) and as the audience’s guide through the story (in much the same style as the Stage Manager in Our Town). Lawler nails the part, engaging the audience with lots of eye contact and maintaining her girlishness even as she acts as a sort of one-woman ensemble, imitating an array of people in town.

This particular production benefits immensely from the intimate size of the theater, which has one to two rows of seats on all four sides, and John Simpkins’ staging, which inhabits every corner of the theater. Michael Schweikardt’s set is stark and minimal, which coheres well with the framed narrative, as if the Little Girl is sketching the whole story out for us. In the first scene, she beckons the audience into the world of the play, spinning for us a beautiful place of open fields, a sky full of stars -- a steadfast setting where “every stoplight in town just hangs there blinking off and on, off and on.” The story that follows becomes a sort of legend, framed by Little Girl and her strange omniscience and, for me, the dream was only broken in one scene with a sort of spiritual “crossing over” that didn’t seem congruent with the rest of the show. Otherwise, it shimmers.

It is exciting to know that The Bus is reaching out to the kinds of small communities it portrays and ideally it will help bring another perspective to towns where such stories are seldom heard. But if The Bus is going be a tool in progress, it needs to be a sensitive one that doesn’t merely throw stones at those it criticizes and doesn’t use it’s big city origins to patronize rural life. It walks this line with incredible grace, portraying the church-government bond as the true antagonist and never once demonizing the individuals who attend the church. The Bus rightly suggests that the main root of homophobia is a lack of exposure to gay people rather than coldheartedness or hate. Best of all, it’s beautiful in every way good theater should be. This is one of the best shows I've seen in a long long time. Go see it while you can, before it has it's real run in Topeka.