Written by Robert Lowell, based on the novella by Herman Melville.
Directed by Woodie King, Jr.
Produced by Horizon Theatre Rep 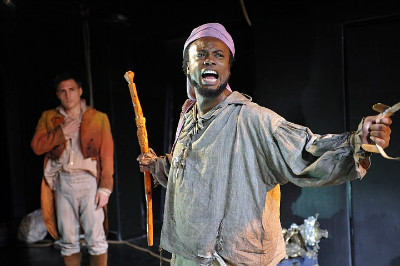 BOTTOM LINE: An intriguing story told in an intimate setting which, in spite of some great acting, falls a little short of being great overall.

I have a weakness for small, cramped New York theaters. I get that (perhaps naïve) feeling of being let into someone’s house and shown their most intimate possession, a production which can only be enjoyed by the privileged few who obtain a ticket. The Flea Theater precisely represents that type of venue, a place that has a knack for presenting interesting productions, some of which take place in their dark and almost air-tight basement space.

The Flea is currently hosting The Horizon Theater Rep’s production of Benito Cereno. This play is actually Robert Lowell’s version of Herman Melville’s novella, and it has not been seen in New York since the 1970s. The play presents the story of a ship full of New England seal hunters who encounter a Spanish vessel adrift in the ocean. When they board the vessel to offer their assistance, not all is what it seems on the Santo Domingo. The only Spanish officer left alive on deck is Benito Cereno (Rafael De Mussa), a rather speechless, disheveled aristocrat who has a constant air of gravity and absentness about him. Benito is relentlessly flanked by his black slave Babu (Jaymes Jorsling), who presents a surprising familiarity with the officer but whose joyful manner and seeming loyalty to his master make him a welcoming character to the Americans. Several slaves who have been freed from their chains linger around on board, giving what seems like complicit glances to one another while suspiciously eyeing their new guests.

The captain of the American ship is Amasa Delano (Arthur Bartrow), a Massachusetts captain who calls the sea his home and his vessel his body (sorry, I couldn’t resist). Bartrow does a great job embodying a gentlemanly figure, one with a strong measure of both patriotism and naivety, who believes in order and discipline but whose good nature and gentle speech give him an almost paternal air, which is especially evident in his interactions with his younger officer Perkins (Benjamin Thys). However, he reminds me of those British colonialists who embody all the virtues of their modern and civilized society, and yet personify surprisingly contradictory values. He effortlessly sees slavery as a means of providing a just form of service to (white) men, while his sense of moral rectitude is injured when he hears that one of the slaves has used the Spanish flag to wipe his back end. I think Bartrow’s performance as Delano is one of the highlights of this show, as he is both convincing and captivating -- you can’t quite love him as he is just too different for a modern audience to identify with, but you can’t quite hate him either as his innocence and paternal ways are heartwarming.

The play also does a fabulous job in building tension and suspense. As soon as the Americans go on board, the whiff of suspicion is intoxicating and you just know that something is not quite right, a sensation which builds up throughout the whole play. Delano’s idealistic innocence makes the suspense even comical at times, as he suspects little or nothing from his new hosts in spite of the clattering of knives by the freed slaves, the presence of a skeleton below deck and the unusual tale Cereno gives to explain why he is the only officer alive on board. Even if they were evil, he says to himself, who would want to kill Captain Delano? The end of the show reveals all with quite a climactic finale, any comical elements disappear in favor of some pretty emotionally charged scenes which give way to a disturbing ending.

While Benito Celeno is an entertaining story with some intriguing characters, the acting didn't always feel consistent.  There are also varying levels of success with which comical elements are introduced into the story. While I greatly enjoyed Delano’s slow piecing together of the circumstances, other elements such as the presence of a slave peeping through the side of the stage with a cheeky grin seemed odd and out of place.

Benito Cereno was written by Herman Melville in 1855, just as slavery was becoming a hotly debated topic in the US. Lowell reused the tale in the 1960s with the civil rights movement in full swing. The story is quite graphic about the terrible plight of the slaves under the orders of the Spaniards and also about the bigot attitude of the “civilized” sailors who barely see them as humans. I imagine most audience members will find this moving, but I left the theatre thinking this play was a social construct against the abhorrent reality of slavery present at the time that it was written. But the friend I went to see the play with managed to discern the opposite. By representing the slaves in a brutal, almost savage way, and their leader as the personification of treachery and evil, one may be led to believe that, in effect, it's futile to integrate the slaves into a civilized society. In any case (and I am aware that Melville buffs may be pricking effigies of me at this point) this ambiguity in the interpretation makes for some good post-theatre cocktail-infused discussions, and it's always exciting to say that about an $18 play.

(Benito Cereno plays in a limited run through October 16th, 2011 at the Flea Theater, 41 White Street. Performances are Thursdays through Saturdays at 9:00PM and Sundays at 7:00PM. Tickets are $18 and can be purchased by calling 212.352.3101 or online at theflea.org. For more show info visit htronline.org.)