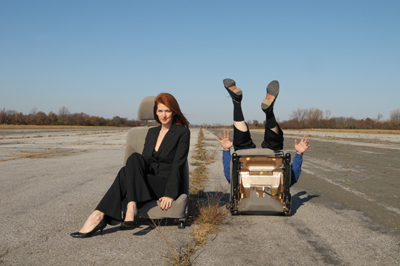 Kelly Anne Burns and Joseph Franchini in The WorkShop's THE NAVIGATOR. Photo by Ashleigh Ide.

What is the WorkShop's mission? How long has the company been around?

The WorkShop has been around since 1994. We were originally known as the 42nd Street Theater Workshop. When the company started, it was not production oriented at all, but rather a theater gym for actors, playwrights and directors to experiment while honing their craft. The evolving landscape on 42nd Street forced us to move, quite happily, into a new two-theater space (built by our then-future artistic director, Tim Harris) in 2002. By then, the WorkShop was beginning to focus on new play development from initial inspiration to finished production. All the while, the WorkShop remains committed to providing a creative home for its many resident playwrights, actors, directors, designers and stage managers.

Your upcoming production is The Navigator, by Eddie Antar . What is the play about?

Story wise, The Navigator is about Dave -- a down-on-his-luck middle class family man who has been out of work for six months. Just as his wife is losing faith in him and his latest job interview looks like a non-starter, he suddenly and magically starts getting the solutions to all of his problems...from his GPS Navigator. The Navigator has the right answer to every decision Dave has to make from how to handle his job situation, how to discipline the kids, what to eat for dinner... how to talk to his wife. Sure, Dave's life improves exponentially, but not because of a single decision he's made on his own. And he doesn't like it. Thematically, the story asks the question, what would we do if we had the answers to all our questions; moreover, what if technology gave us those answers? It's an especially relevant play given how the economy is affecting millions of people like Dave and what they're willing to do to get out of it. How much of our lives do we really own? And if we don't own our decisions, then whose life are we living?

What can audiences expect from The Navigator?

Audiences can expect a terrifically entertaining and thought-provoking play. With the exception of the Navigator, everyone in the audience has been one of the principal characters at some point in time. We've all faced uncertainty in our future, in ourselves and in the loved ones upon whom we rely. We've all been afraid of risk, made sacrifices to get by, and stood at the ready to help a friend who has begun to unravel. We've all wished for the answers to our questions to come out of nowhere. Audiences will not only get to examine the ramifications of those desires, but will be taken on a great ride in the process.

What excites you most about this script and this production?

Theatrically speaking, The Navigator is a high-wire act disguised as a play. You have four actors -- two playing multiple roles, another playing a talking machine, and finally the lead who literally has every other line in the show for nearly an hour an a half -- in a play with insanely intricate dialogue, and because the story happens almost entirely in telephone conversations, the actors can't really move or make eye contact with each other. They're giving realistic, grounded performances in a Twilight Zone-like fantasy without any of the usual bearings and moorings actors are allowed. The amazing thing about this cast (Kelly Anne Burns, Nicole Taylor, Joseph Franchini and Michael Gnat), and this director (Leslie Kincaid Burby) is that they make it look easy when in reality, they're up there without a net.

What are the WorkShop's future goals? Where do you see yourselves in 5 years? 10 years?

We're an Off-Off-Broadway company that would eventually like to shed one of its "Offs." We've been around a long time, longer than some Off-Broadway professional not-for-profit theaters, yet we remain a volunteer-staffed artists' collective. We'd like to break the glass ceiling so our playwrights can write plays, our actors can act, and our directors can direct without also having to tend the box office, build sets or run the light board. In 5 years, I'd like us to have a paid staff, and generate the funding to support our artists, our process and our productions. In 10 years? At least one Pulitzer. Why not?

(The Navigator plays at The WorkShop Theatre, 312 West 36th Street, from February 9 through March 3, 2012. Tickets are $18. To purchase tickets, and for more information, visit workshoptheater.org.)