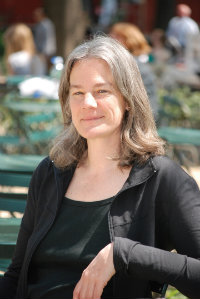 THEASY: What is your mission?  What are your artistic endeavors?  What are the advantages to an all-female classical ensemble?

RP: The Queen’s Company is dedicated to the creation of innovative productions of classical plays featuring all-female casts. We wed a love of language to a love of life, weaving inspiration from history and world cultures into an indigenous classical theatre grounded in our New World experience. Our work is known for its exquisite use of language, creative storytelling and artistic playfulness. We advocate gender-blind casting in classical theatre, either through all-female casts or gender-blind casting.

The innovation of our productions goes beyond our all-female casting with its unique combination of quality text work, bold physicality, creative storytelling and artistic playfulness that interweaves music and movement sequences with the classical text. We wed a love of language to a love of life, drawing inspiration from world cultures and history, celebrating the poly-cultural American voice. Our approach to the classics speaks to our complex New York City community, embracing the spirit of play and shared intimacy that brings actors and audience together.

We see classical theatre as a window into a world both old and new where people speak to live, a contemporary experience that strips away the transient veil of current events to reveal the deeper currents that shape our lives. We believe that the universality of these stories - the foundation of our culture and theatrical traditions - should not be limited by gender or race. The mythic journey is a human journey that embraces the male and female in all of us.

THEASY: How long has your company been around?  Tell us about your past productions.

Past productions are: The Wonder, Twelfth Night, The Taming of the Shrew, Edward II, School For Scandal, Much Ado About Nothing, The Lucky Chance, Antony & Cleopatra, The Feign’d Courtesans, The Duchess of Malfi, The Rover, Macbeth

THEASY: What can audiences expect from your next production of As You Like It?

RP: They can expect a surprising and refreshing new take on a favorite and familiar play.

Our As You Like It begins in a post-coup world where domination and submission live peacefully entwined, a world that explodes the moment someone raises their head and asks for more, or speaks a challenge to the official story. Our As You Like It draws inspiration from the September 11, 1973 Chilean coup, but the choice of possible settings was endless. As we workshopped As You Like It this past year, the Arab world exploded in Orlando and Rosalind-esque acts of gentle defiance, giving the play a timely resonance.

When we yearn for freedom and can’t find it where we are (or are in danger of dying for speaking) our only choice is to flee in search of it. However, real freedom is rarely what we think it is, and such is the Forest of Arden. A land of sheep, shepherds and exiled lords. I think Shakespeare’s Arden is far much more complex than our usual romantic pastoral projections. The fleeing exiles bring new life and unexpected messy collisions, which is what I like to think of as freedom. Always under threat, a delicate bumbling creature that stumbles as often as it strides, call it what you will, communalism, cooperation, democracy, its what happens when we start listening to each other and just let life be.

THEASY: What are you future goals?  Where do you see the company in 5 years?  10 years?

RP: My future goal is to see all-female and gender-blind casting on every stage were you find Classical theatre. In 5-10 years I see us doing what we have always been doing – putting women on stage in quality classical productions. My greater goal is to see our work produced by other larger companies where our actors can get a decent wage for their work onstage and we can expose a wider audience to the delights of gender-blind casting. In the bigger picture I’d like to see us onstage at The Public and the RSC, but till we see what fate has in store for us, we will keep doing our work for our audiences in our downtown NYC theatres.

As You Like It plays May 4-20, 2012 at Walkerspace, 46 Walker Street in Tribeca. For tickets, visit SmartTix.com and for more information visit QueensCompany.org.