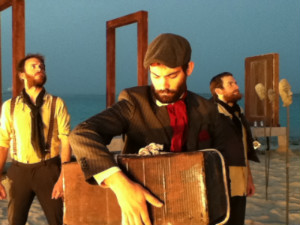 Since 1997, Theatre Mitu has operated under the auspices of Artistic Director Rubén Polendo producing “whole theatre” in New York and abroad. In that time, the company has created such inventive productions as the hairless Hair at NYU, Death of a Salesman with puppets and masks, and a male Medea using elements of Noh, Butoh, and early German cinema. By studying spiritually-driven theatre around the globe and then applying that knowledge to creating original work as an ensemble, Mitu continues to refine and cement their theatrical methodology and infuse it into their breathtaking and highly original shows.

Theatre Mitu’s method of study comes from Polendo’s own background as a scientist. (Yes, before Rubén Polendo was mentored by Peter Brook and became a theatre director, he was a scientist.) Because of this, Polendo has a natural comfort experimenting and testing new ideas. So Mitu’s permanent ensemble doesn’t just observe theatre traditions, they practice them to learn first-hand what value can be derived. As Polendo put it, Mitu strives “to investigate the training methodologies and to create a training methodology.”

Theatre Mitu’s ensemble has trained in the ancient theatrical traditions native to many regions, but particular attention has been paid to “field research” in traditional dance and martial arts in Bangkok and South India. Mitu makes perennial pilgrimages to both these locales in the form of summer artist intensives where they invite artists from around the world to join them in the study of these regions’ more spiritually-based performance disciplines. Mitu has also spent notable time “in the field” in Japan and Nepal/Sikkim.

But Mitu is not just an international organization; the company has had a collection of fruitful partnerships with institutions here in New York and around the country, including a stint as a resident company under the New York Theatre Workshop umbrella. Mitu has associated with Sundance, Juilliard, UCLA, ACT Conservatory, Bard, BYU, CCM, The O’Neill Theatre Institute, SUNY Geneseo, University of Mexico, UT Austin, Vassar, and most prominently with NYU, where Polendo teaches and where Mitu has produced shows within both the graduate and undergraduate theatre programs; and Mitu still holds a residency within the NYU Tisch Playwrights Horizons Theatre School. It is this NYU affiliation that has led to the company’s latest venture. Following the germ of NYU’s new outpost in Abu Dhabi (the NYU-Abu Dhabi Institute), Mitu went to the United Arab Emirates in March to produce the first show in that country for NYU: CHAOS

An adaptation of short stories by Luigi Pirandello, CHAOS was chosen because of its themes of migration. Polendo explained that Abu Dhabi is a city where the majority of the population is not native: approximately 75% are expatriates, making questions of leaving one’s mother land and finding a new home highly appropriate for this diverse audience.

This diversity also posed a producing challenge for Mitu. Polendo wanted to reach the different groups of people inhabiting the city and entice them ALL to attend performances. However, the population of Abu Dhabi is as disparate as it is diverse and an event geared toward UAE nationals, European residents, students, etc. is highly unusual. To accomplish this goal, Mitu not only reached out to civic groups, community centers, and institutions, but also took an active interest in spreading interest through word-of-mouth initiatives by company members.

On Wednesday, March 2, 2011, CHAOS premiered on the Corinch Beach outside the city and ran for four performances. The set was built so that it backed up to the ocean, allowing the surf, sun, and blue skies to serve as a backdrop behind the actors. CHAOS marked the first professional theatre production to be conceived, rehearsed, and produced in Abu Dhabi. It was a historic moment for the metropolis, for NYU, and for Mitu, and it also marked a new stage in the ever-expanding Mitu consortium of international theatre experimentation and expansion.

Mitu then brought this experience back to the states with a one-night panel on March 24th discussing “the importance of Pirandello for the tradition of theatre, the challenges of adapting his work for the stage, and the central role of labor and migrant identity in his work.” This panel was sponsored by Mitu and NYU’s Department of Italian; it was curated by Chris Mills and featured Jana O’Keefe Bazzoni, Jane House, Felice Italo Beneduce, Federico Pacchioni, and of course Rubén Polendo.

While Polendo says that the relationships Mitu has established in Bangkok and South India will be maintained, the company has made a significant investment in Abu Dhabi and the NYU Abu Dhabi Institute. Whereas the company formerly gathered information abroad and brought it back to produce here in the city, Abu Dhabi is now set up to be a second home for both Polendo as a faculty member and for Mitu as his company. Theatre Mitu is becoming not just internationally-interested, but now a truly international company. This ensemble, which the New York Times called “one of the top ten, hot companies in New York,” is now going to have to split time between Manhattan and that other cosmopolitan city on an island. We will be sad to see them gone, but can be glad in anticipating what they bring back.

Now back in the states, Mitu is preparing their next local project, Scorched, an interpretation of Oedipus Rex penned by Wajdi Mouawad in 2007. “Set against a backdrop of war, violence, and the hardship of migration camps, Scorched tells the story of two siblings fulfilling their mother’s dying wish for them to find the father and brother they never knew they had.” As a first step toward building this piece, Mitu presented a reading on March 22th at NYU. To learn more about Theatre Mitu and their future endeavors, visit theatremitu.org.