Knife Edge Productions is a fledgling organization more focused on the work being produced than on its own internal development. Originally formed in 2008 for a production of Adam Rapp's Red Light Winter, the group is now bringing Stephen Belber's Tape back to the New York stage. Tape runs September 9th through 24th at the June Havoc Theatre, 312 West 46th Street. 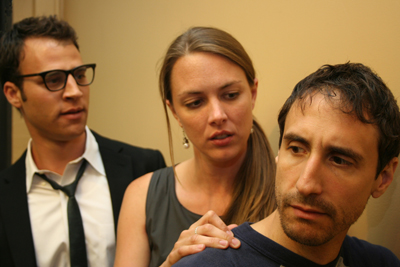 THEASY: How and why was the company formed? What are Knife Edge's objectives?

NEIL HOLLAND: To be clear, Knife Edge Productions is not a theatre company at this point in time. I, along with Sonya Tsuchigane (both of us graduates of the prestigious William Esper Studio in NYC) founded this production company in 2008 as a vehicle to produce an off off Broadway production of Adam Rapp’s Red Light Winter. In terms of the future, in an ideal world I would like to continue to produce plays that my colleagues and I are very passionate about. But truth be told, I am not really looking beyond Tape at this point in time.

NH: Our mission has changed with each production. This is our mission for Tape: In the world of theater, new plays are always at the forefront, and after a play makes its debut in New York, it often disappears from view and is never heard of again. Stephen Belber’s Tape is hardly such a case. Since its premier ten years ago, it has been made into a film, and has seen countless revivals throughout America and abroad. However, not since its premier has it been given a high quality, professional production here in New York. We believe that Mr. Belber is one if the finest working playwrights today, and that this play is certainly among his best. Its history speaks for itself, and our company’s intention is to produce a high quality production here in New York, incorporating a cast of recognized, upcoming young actors perfectly suited for the roles, under the direction of a well-established, New York Times recognized theater and opera director (Sam Helfrich). We believe this is the perfect moment to bring Tape back, with a perfect storm of participants and the enthusiasm of the playwright for our project.

THEASY: Why did you choose to produce Tape?

DON DIPAOLO: This has been a play that Neil and I have been wanting to do very badly since we were in acting school together. We had always talked about how great it would be to do it. Then one day Neil called me up and said. “Guess who just came into my gym and I was training...Stephen Belber.” I nearly passed out when he told me. Neil became friends with Stephen and we did a reading for him, his wife Lucie Tiberghien (who is an amazing director) and one of his best friends, Sam Helfrich. As you can see, Sam became our director.

THEASY: What can audiences expect when they check it out?

DD: Well first of all, the stage is going to be completely different than probably any other production. It’s still a hotel room but lets just say there is something very different. “Not the same Tape” is what we like to say. This play has many layers and we are trying to find an arc to it that is not so common in productions from the past. This has been an amazing rehearsal experience because we have really explored many options.