A Theasy Interview with the Acclaimed Playwright

Gregory Moss's new play, Billy Witch, premieres at APAC this month. The young playwright has an impressive resume and an appropriately busy upcoming schedule (the guy's kind of in demand). We feel pretty confident that the always excellent APAC will deliver an impressive production of Moss's summer camp comedy. Billy Witch plays November 1st through 17th. For schedule and tickets, visit apacny.org. 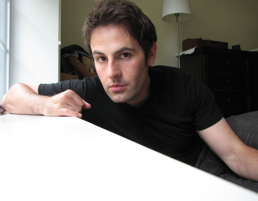 THEASY: How and when did you start writing plays? What is your theatrical background?

GREGORY MOSS: I started acting when I was 8. Every day, I’d come home from school and see my sister watching soap operas. I wanted to be doing the thing that she found so interesting, so I asked my mom, and she signed me up for classes at the local community theater. Soon after I got my first role as a dancing roasted turkey in a Christmas play. Being backstage, watching women get into costume and make up, the quick changes, seeing how sort of precarious things were on the back side of this illusory space -- that sold me. I loved it. Seeing how this great magic trick was done. I loved it.

I was also writing, from around that same time, but didn’t start writing plays until six or seven years ago. The first things I wrote were solos for me to perform, or plays for my friends to act in. There was one about a man digging a hole to the center of the earth, and another one -- a drag piece -- about a girl whose believes her prom night will coincide with the Rapture. I wanted to write things that I felt would get me in trouble, things that I actually felt a little embarrassed about, and that had to exist in real time, in front of an audience.

Those early plays led to grad school, which really opened me up, in terms of committing to my particular voice and point of view, and in terms of developing a vocabulary with which to talk about craft. I think the real education began after school, though. Audiences tell you what you need to know. I’m still a student -- by choice -- still learning how to do the things I want to do in the medium.

THEASY: What is your storytelling style? What kind of plays do you personally enjoy?

GM: I love plays that let the machinery show. You know? Plays that acknowledge that we’re all in a theatre together, and that we’re watching something that has been made by other human beings. Plays where actors change costume right in front of us. Some might find it “alienating” but watching people putting on costumes, playing parts, and telling stories is innately empathetic.

I like plays that include the audience, not in some direct Blue Man Group way, but that leave space -- in the text, in the performance, and especially in the design -- for the audience to employ their imaginations. I like being given a bit of work to do in the theater -- I don’t want the dots to connected too tightly.

My teacher, Paula Vogel, wrote in the beginning of one of her plays, “This is a bad wig play.” Meaning, the audience should be aware of the make-believe that’s going on on-stage, and should be invited to get in on the act.

THEASY: Who are your favorite playwrights? Whose work has inspired your own?

GM: Paula Vogel, for her restless formal experimentation, and Maria Irene Fornes, for her wide-open heart and crystalline language. Mamet, abusive father that he is, continues to make plays that interest me. Wallace Shawn writes perfect plays that fit awkwardly in the contemporary American theatre. He and Charles Busch, in totally different ways, are big influences on me, especially in writing about sex and sexuality. Kristen Kosmas writes these small, lovely, Chekovian plays that I adore. Sylvan Oswald is the real deal, I think. And Shakespeare, and Suzan-Lori Parks. I love a bunch of the writers that I’ve taught and taken classes with -- young guys like Max Posner and Justin Kuritzkes and Brendan Pelsue. Whether I have anything in common with any of these folks, I don’t know, but the spirit of their writing inspires me.

THEASY: Your play, Billy Witch, premieres at APAC in November. What are you most looking forward to from this production?

GM: The young lovers midnight rendezvous at “Consummation Station.” And the s’mores.

THEASY: What can audiences expect when they see Billy Witch? Why should they buy a ticket?

GM: Billy Witch is a fast and furious trip through adolescence in the container of a day at summer camp. It’s hilarious, sexy, menacing and, at points, I think, very poignant. The audience gets to relive their own summer camp experiences and revisit the joyful confusion of their own early teenage years. What could be more fun than that?

THEASY: What is next for you? Where can we find you and your work in the coming year?

GM: Next for me -- lots of work, finishing commissions for Woolly Mammoth and Clubbed Thumb, and continuing work (with the amazing composer/lyricist Joe Iconis) on a new musical based on the life and work of Hunter S. Thompson, for La Jolla Playhouse.

My newest play, Reunion, will be seen on the west coast next summer, and my play House of Gold has been translated into French, and will have a European premiere in the spring in Paris, under the direction of Frederique Plain.