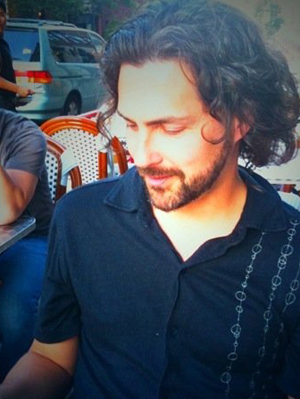 MM: As the man in charge of Bug Company, tell us a little about who you are, the type of theatre you (and Bug Company) like to make.

SB: Who I am: erm, an early-mid-career white male middle-class gay-married freelance theatre director, born in Seattle, raised Canadian, and for almost fifteen years now based in NYC.

MM: Why and when was Bug Company created?

SB: Well, for years I resisted the idea of forming a theatre company, even though a lot of young directors do — I knew that I was a better director than producer, and I just wanted other companies to hire me to direct their shows. And I was lucky enough that that happened pretty regularly. After a number of years like that, though, I started to notice that from time to time there would come along a project that I really wanted to see happen, and nobody was going to put it on but me. So since I was periodically producing things anyway, and tending to collaborate with the same folks, and the work started to have themes and things in common, it seemed like it was high time to give a name to the enterprise. Thus Bug Company.

MM: What is Bug Company's mission?  What do you hope to achieve in the coming years?

SB: Bug Company’s mission is to look at questions of translation in performance as both a practice and an idea. That is to say, we’re interested in the complicated questions around how to translate a play written in one language into another language such that the text is most excitingly performable. And then, we’re interested in the idea of translation, and what all that might encompass. Is it a kind of translation to put a novel on stage? To cast unconventionally, say in terms of ethnicity or gender? To set a period play in the present? These are the kinds of questions that get us juiced. (We didn’t arrive at them by thinking about it so much as we did by just looking at what we’d done and connecting the dots.)

I’m trying not to put a lot of pressure on what I want Bug Company to achieve. It’s early days for the company, so the idea for the moment is to be responsive to the things that inspire us and the opportunities that crop up, and see where that takes us. So far it’s been exciting.

MM: The Eyes of Others, your new production, opens September 8th at the New Ohio Theatre. What is the show about?

SB: The show is a new play by the young Bulgarian poet and novelist Ivan Dimitrov. It’s neo-absurdist — a little bit of a Beckett/Havel/Ionesco world — but set very much in the present, among our current preoccupations: global capitalism, consumerism, mass interconnectivity, surveillance. It’s about a couple of guys in expensive suits who meet each other every lunch hour on the central square. They compete, they quarrel, they freak out, they calm each other down. There’s also a voyeur there, someone who just watches them all the time. They don’t know who he is, but it makes them feel better.

MM: The Eyes of Others was conceived and originally performed outside of the US. What are the challenges bringing a Bulgarian play to the states, both in terms of production and translation? How did the script make its way to New York City?

SB: In fact this is the world premiere of The Eyes of Others — it hasn’t been produced in Bulgaria yet, though signals seem good that a production will happen later this year. That fact made the process very interesting, as we were lucky to be able to work with both the playwright and translator in the room. So, when a question came up, we’d need to look at whether it was a question about the play itself, or the translation, or both — whether we would make a change in the English to be a better rendering of the Bulgarian, or make a change in the English that Ivan would also make in the Bulgarian, or not change the text at all, but check in deeply about how the moment worked in the Bulgarian, and then change how we were performing it.

The script came to NYC as so many international plays do, through the hotINK festival at the Lark Play Development Center. Catherine Coray is the director of hotINK, and she hired me to direct the reading of The Eyes of Others back in March. It just wound up being a great fit and really exciting play.

MM: What can audiences expect when they see The Eyes of Others?  Give us your elevator pitch...why should we buy a ticket?

SB: This play is not like any play I know of that’s being written in the US right now. It will grab you and entertain you like crazy, it will make you laugh, and it will also tickle and stretch your brain.

MM: What's next for Bug Company?

SB: Sleep! And then following our antennae to the next exciting thing.