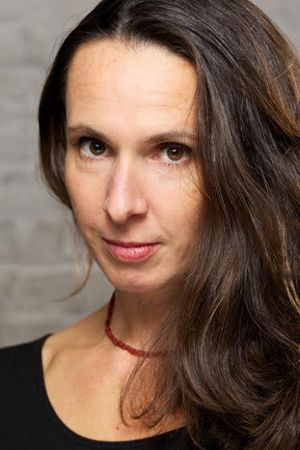 TELL US ABOUT BLESSED UNREST. HOW WAS THE COMPANY FORMED? WHO ARE THE POWERS THAT BE?

Blessed Unrest was formed in 1999, and we have been creating original work ever since. We are an ensemble that includes New York based artists from all over the world, and many of us have been working together for over a decade. Matt Opatrny and I were co-founders of the company and remain the leaders as Managing and Artistic Directors.

WHAT IS YOUR MISSION? WHAT KIND OF WORK DO YOU PRODUCE?

Blessed Unrest uses the safe structure of training, rehearsal and performance to create an environment where dangerous things can happen. We produce dynamic, disciplined, and exuberant new works for the stage in NYC and abroad, building original pieces and reconstructing established texts with our diverse ensemble of artists. We are a non-profit, ensemble-based, experimental theatre company generating original work since 1999. We believe that artistic collaboration has the power to break down cultural barriers and build international bridges. We therefore pursue international exchange and partnership including with Teatri Oda of Prishtina, Kosovo with whom we have twice toured internationally with original bilingual plays. We strive for precision and rigor on stage while maintaining a sense of joy and humor. Our process and productions are exuberant, not alienating. We make plays that challenge the audience, allowing them to interpret the layers of story through their own lens without manipulating their emotions. Blessed Unrest received New York Innovative Theatre Awards for Outstanding Production (2008), Outstanding Stage Manager (2010), and Outstanding Choreography/Movement (2013). Artistic Director Jessica Burr received the 2011 Lucille Lortel Award from the League of Professional Theatre Women.

YOUR CURRENT PRODUCTION IS AN ADAPTATION OF DICKENS' A CHRISTMAS CAROL. TELL US ABOUT YOUR UNIQUE APPROACH TO THE BELOVED SEASONAL TALE.

Dickens' story is about much more than one mean old rich guy. In 1843 he had planned to publish a political pamphlet entitled “An Appeal to the People of England on behalf of the Poor Man’s Child”, but instead wrote A Christmas Carol. He was shedding light on a system that left common people desperately struggling, while the powerful were blissfully ignorant.

This version of "A Christmas Carol" is deeper, darker and more complex than it is usually allowed to be, while retaining the story's inherent hopefulness and optimism that radical change is possible. I am fascinated by what made Scrooge the way he is, why he's choosing to isolate himself, whether he is capable of radical change, and if the people around him will accept his efforts to connect. I am obsessed with Scrooge’s self-made isolation, and the effect that it has. The story reminds us that as humans, if we are cut off from and not acknowledged by others, we lose our compassion. Scrooge takes one small step towards a simple friendship at the end of our play, he has a moment of connection, and that is the humanizing revelation of the story.

Six actors play thirty-seven roles and magically create the different worlds of the play by using a very limited palette of props. For example, a piece of fabric creates a swing, a parrot and a baby, and a door becomes a staircase, a bed and a dining table. The actors never leave the stage and are constantly shifting from one character to another. Plus there's a big dance number thrown in, so by the end they're quite sweaty. Part of the fun of this show is wondering what or who they will become next.

WHY SHOULD AUDIENCES CHECK OUT A CHRISTMAS CAROL?

Matt wrote this adaptation because he has always adored the story and yet was never quite satisfied with it. To be honest, I have never really been interested in it until this version. If you already love the story, you’ll see it told in a way you’ve never imagined. If it is not one of your favorites, I think we’ll change your mind.

WHAT'S NEXT FOR BLESSED UNREST?

This spring we have several new plays in development which will have some work-in-progress showings. Our next full production will be the NYC premiere of “Burrneshat (The Sworn Virgin)”, our original bilingual play created with Teatri Oda of Kosova. The play is based on the ancient Albanian tradition now beginning to vanish, in which women take, or are forced to take, an oath of lifelong celibacy in exchange for the rights and responsibilities of living as men. We toured Albania, Macedonia, and Kosova last fall and we will be bringing Teatri Oda here later in 2014 for a run in New York.

(A Christmas Carol plays at The Interart Theatre, 500 West 52nd Street, through December 22, 2013. Performances are Mondays at 7PM; Wednesdays through Saturdays at 8PM; with additional shows Sunday, December 8 at 3PM and Sunday, December 22 at 3PM. Tickets are $18 and are available at BlessedUnrest.org or by calling 646-238-0829. The show runs 90 minutes with no intermission and is appropriate for adults and adventurous kids 12 and up.)