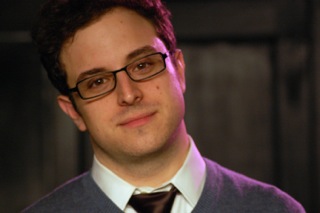 1. How did your directing career get started? When did you first get involved in theatre?

For my first year and a half out of college, I did no theater at all. I was trying to quit, cold-turkey, convinced that a life without theater was better than a life of struggling to make ends meet. I was a freelance programmer, and wrote a lot of code for small businesses. And I lived very comfortably, but I was miserable. Then a friend offered me a job sound-designing for a 6 week festival at the Antaeus Company in LA. It was a crazy schedule, something like 10 staged workshops and 6 readings. I don’t remember exactly. But I took the job, and from there it was a no-brainer. I could never go back to just writing code again. It was 6 of the most harried weeks of my life. I had never designed sound before (my undergraduate degree was in scenic and lighting design), so I had a very steep learning curve. But many of the relationships I made on that project, were the basis for my early design career.

I had always known that I wanted to be a director, though. I directed my first little one act in high school, and I was hooked. So I bided my time until I had a few opportunities to self-produce in my mid-twenties. The first was a production of Philoctetes in Mumbai. We rehearsed for weeks and didn’t even end up getting to perform because of the terrorist attacks, but it was a great experience and a reminder to me of what I loved about the form. A year later, I directed a new one act written by a friend, which ran a weekend at a small storefront theater. The actors in it decided they wanted to do another project together, and I directed them in Seascape with Sharks and Dancer in a six week run that got pretty great reviews and a little recognition. That was the first time I really felt like a professional.

For me, it’s about narrative. I love corralling every piece of a project towards telling a unified story. That’s all I’m really working for -- to make sure that every artist involved is on the same page. There’s this tremendous energy when the design, the performers, and the writing align like stars. I think we all hope for that to happen as much as possible in a process and, ultimately in performance. I try to enable that kind of magic.

3. Who are the theatre artists you most look up to?

This is a really tough question. Really all of them. I know that sounds like a cheeseball, cop-out answer, and in a way it is, but I do actually feel like I’m constantly learning an obscene amount from every artist whose work I see and every artist that I work with. I think the moment I feel like I’m working with people I don’t admire or that people I don’t admire are getting the really big opportunities is the moment I won’t have the strength to make the sacrifice this work requires. We’re all working like hell to make good work. I believe in the inherent worthiness of that endeavor,  and so I look up to everyone who does that in good faith, because I think that’s always evident in the work.

Lately, I've been particularly enthusiastic about the insane energy and rapid work of #serials@theflea (run by the inimitable Steve Stout and Alex Grubbs). The army of extraordinary actors, directors, and playwrights who make new plays happen every week amaze me. I'm so proud to be part of the community at The Flea, and am very grateful that Jim and Carol keep me around.

4. You have two plays running simultaneously in January, JOB and The Man Under - can you tell us a little about them?

Sure. JOB is the biblical story of Job. Thomas Bradshaw has penned this fearless, straight-ahead adaptation of the text. It really is the story, in all of its violent, to-the-gods-we-are-playthings horror. Audience response really varies every night, but it’s never ambivalent. Some audiences really feel Job’s pain, and so they’re with him as he loses everything. Very quiet and serious. Some audiences are with God and Satan, and to them, this one hour roller coaster is hysterical. It’s a really bold and provocative piece about the capriciousness of suffering. In this day and age when politicians cite the Bible with such regularity, looking honestly at what is in the book is really important to me. JOB has been running (with a break in November and December) since August 31st at The Flea Theater, and is scheduled to close on January 28th. For more info and tickets visit theflea.org.

The Man Under is a new play by Paul Bomba about mourning, love, and trying to find an apartment in New York City (mostly the first two). Jeff is mourning the death of his fiancée when he meets this mysterious girl, Lisa, on a subway platform that has the same emotional issues he does. It’s a good thing for him for awhile, but we all know how two people who are screwed up in the same way can make things worse. Meanwhile, his two best friends, Martin and Jen are a little too distracted to look out for him because they’re busy in their own Ross-and-Rachel style romance. Awkward city. It’s a really New York story. Jeff and Lisa explore the subway together. Martin and Jen really do grapple with apartment issues. This kind of stuff just doesn’t happen in cities where we’re not so packed in.  It starts January 25th at 59E59 Theatres. To learn more, check out their website 59e59.org.

As soon as The Man Under goes up, I’m back to The Flea, where I’m collaborating with [playwright] Tommy Smith and [director] Tom Costello on a new piece of audio theater called Nectarine EP. It’s totally immersive and experimental and a really fascinating follow-up to the piece Tommy did at IRT this month (Lotus Eaters EP). Tommy is at the forefront of a renaissance in the form. It’s gonna be very cool. I’m not sure that saying more than that will clarify anything so I’ll stop there. But it starts February 8th.

I'll also be collaborating with the other directors at The Flea on The Shakes, a late-night serialized presentation of classical theater. This round we're doing Romeo and Juliet, with each director directing a different act on a different weekend. It starts on January 31st with Act I, directed by Kel Haney and Liz Carlson, and will be a crazy blast. For more info, visit theflea.org.

As for where I’ll be in 5 or 10 years. I have no idea. Isn’t that part of what’s exciting about what we do? I hope I’m still making plays with people I love. That would be enough.