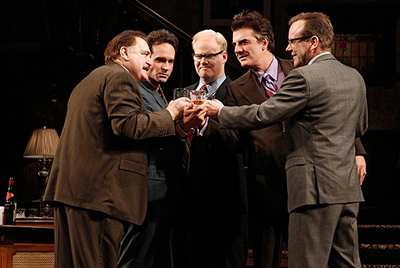 BOTTOM LINE: Mis-cast, mis-directed, and mis-guided in its sentiments, this movie and television star vehicle currently playing on Broadway is a miss in my book.

That Championship Season won the Pulitzer Prize for best play in 1972. In 1973 it won a Tony award for best drama. Soon after it closed on Broadway, and a year and a half later, it fell off the cultural radar. It did not make the canon of American drama; it did not become one of those standards that one sees in every community theater across America. It did become a TV movie of the week. Some might see the new revival on Broadway, with a powerhouse cast of very popular television and movie stars (particularly Kiefer Sutherland from 24 and Chris Noth from Sex and the City) as the opportunity for this little-considered play to get its due. In fact, one of the producers is named Second Chance Productions.

Here’s the scenario: Five men, (not men of color, of course), get together to celebrate the twentieth anniversary of their high school basketball championship. The coach, played by Brian Cox, the hero and father-figure to his band of star athletes, played by Jason Patric, Jim Gaffigan, Kiefer Sutherland, and Chris Noth. The fifth starter on the team has defected from the club and does not attend the annual reunions. This year, the men have something more than just nostalgia on their minds; they must work together to keep one of their ilk, George Sikowski (Jim Gaffigan) in the office of mayor in their dying Pennsylavania town. His challenger? A progressive do-gooder who is both a kike and a possible commie, according to Coach.  Additionally implicated in this threat are the N’s, the B’s and every other uppity group that rose up in the 60’s to demand their rightful place in American society. Oh the horror.

In addition to this attack on their rightful supremacy by people who don’t know their place anymore, the former high school basketball stars are hitting their mid-life crisis bottoms; they have failed to become geniuses and heroes as Coach hoped they would, and instead are whining, disappointed, self-destructive, and self-aggrandizing, and they secretly hate one another. So, we have a bunch of men struggling to make sense their place in the world and find a sense of self after massive cultural shifts have occured and they have been unseated from their thrones, or at least asked to give up a little room at the table. So far, I’m into it.

The problem is that if That Championship Season aims to show up the problems of a society centered around straight white men, it never goes far enough in its critique. The one self-assured man in the group is Coach, a hold-out the from the previous generation –- a red-blooded man who believes in winning at any cost and who still mourns the passing of American greatness as emblemized by his own father’s fall from grace during the Great Depression. The Coach and his minions are struggling and limited, the playwright Jason Miller makes that clear -– they are threatened and turn to hate to bolster their floundering pride. But there’s a problem; the team and the play never explicitly rejects Coach and his defensive, hateful point of view. They almost become disillusioned with him; they almost get derailed in their efforts to mount a reactionary political campaign based on ethnic slurs and red-baiting; they almost break up as a championship team -– but not quite. In the end, they realize they love each other, would do anything for each other, and must band together to fight off the K’s, the N’s and the B’s. In the final moments of the play, one of the boys asks Coach if he keeps up with high school basketball anymore. Coach responds ‘No, I don’t watch basketball anymore; it’s no longer a white man’s game.” And curtain.

Mosher’s direction is also disappointing. As the director, if you don’t have to concentrate on staging that frees you to concentrate on the performances of your actors. In this production, you’ve got star talent, but they rarely perform on stage. Chris Noth could barely be heard throughout the entire play, and he is allowed to totally fake his way through a critical moment when his macho, grand-standing character breaks down in tears. Brian Cox, in a mostly one-note performance, rants his way through the play relentlessly and gratingly. Jim Gaffigan, a doughy, vulnerable Phillp Seymour Hoffman lite, is completely miscast as the small-town mayor fighting to stay in office for another term; there is no part of him that is ‘the most popular boy in high school/star athlete who parlayed his local celebrity into a mayorship and had lost his mojo along the way.’ When Gaffigan trains a rifle on Noth, after learning that Noth’s character has had an affair with his character’s wife, the moment has all the suspense of when I take off my shoe, ‘Will there be a foot in there? Yes!’ ‘Will the character lose his courage and drop the rifle without injuring a soul? Yes!’ In Gaffigan’s portrayal, his charcater has as much spine as a caterpillar.

Jason Patric is the stand-out of the cast as a dissolute alcoholic soothsayer, who, though a complete failure, is  managed to salvage a shred of integrity; he is very funny, charasmatic, and best of all, audible. And then there is Kiefer Sutherland, almost a non-entity in the play. He chose to make his character so self-effacing that one often forgot that he was there, he was standing at the back of the stage listening, or sitting on the couch hugging himself. In his character’s big moment, the monologue where he states that he is no longer going to be stepped on, he is going to take his due, he’ll go out and destroy if he is betrayed by his fellows, just see what he can do--Sutherland has chosen, and Mosher has sanctioned (or the other way ‘round) for his character to be seated at the far end of a table eating chicken. A big star, and likely draw for audiences, finally has his big moment in the script, his turn to take center stage, and he eats chicken throughout the whole scene!

For those interested in peeking back into theatre history, in order to see what a Pulitzer Prize-winning drama looked like thirty years ago, might find something of interest in That Championship Season. Of course, there are also those who will thrill to see Sutherland or Noth live on stage. But for the rest of us, I would suggest saving your money for something more relevant (and better directed). Certainly, That Championship Season is well-written, with engaging characters, truthful dialogue and interesting themes. But the end result is perhaps too sympathetic to the problems faced by straight white men who learn they are no longer the center of their world.

(That Championship Season plays in on Broadway in a limited run until May 29, 2011 at the Bernard B. Jacobs Theater, 242 W. 45th Street. Performances are Tuesdays at 7PM, Wednesdays at 2PM and 8PM, Thursdays and Fridays at 8PM, Saturdays at 2PM and 8PM, and Sundays at 3PM. Tickets are $62-$129. Visit www.thatchampionshipseason.com for more information and www.telecharge.com tickets.)