By Michele A. Miller; Directed by Melody Brooks 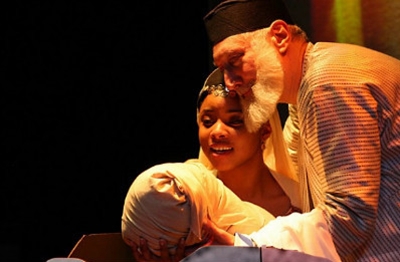 BOTTOM LINE: A stylistically bizarre and light-hearted comedy about an alternative story of the conception and birth of Jesus.

Mother of God! is the latest production to stem from the New Perspectives Women’s Work Lab. Written by Michele A. Miller and directed by New Perspectives founder Melody Brooks (see an interview with Brooks here), this play provides a farcical alternative to the well-known Christian story of the conception and birth of Jesus. This comedy frames the biblical account as a convenient explanation which can satisfy the personal interests of the involved parties: Mary’s family honor, Joseph’s mental sanity, and the political aspirations of the chief priests in Jerusalem.

The play presents young Miriam (Keona Welch), who is to be married off to Joseph (Charles R. Gerber). In spite of his wealth, Joseph isn’t exactly the ideal husband: he’s not too big on the looks, he’s a few decades past his prime and he’s true to the biblical image of the Pharisee - outwardly pious while inwardly hypocritical. While pondering on this daunting prospect, Miriam encounters an angel, or rather, as the play clarifies, a hunky itinerant actor still disguised as the Roman God Apollo from his latest gig. Their passionate encounter leads to her pregnancy by the “God’s fire,” and will set the scene for most of the comical events that follow. In the meantime, the three wise men from the East – the Magi - are shown in a somewhat different light than their gospel counterparts. Casper and his contriving soviet buddy Melchior are convinced they can make a quick buck off the paranoid King Herod, and have recruited a Chinese astronomer, perhaps the only one in the play with some real wisdom to offer, to help them fain knowledge of the stars and their forebodings. The characters and their different associations are extremely funny, and are supported by the fact that the play simply overflows with Jewish stereotypes, which reach near hilarity in Hannah, Miriam’s mother (Marisa Petsakos), the epitome of a stereotypical Jewish mother.

Mother of God! presents a very specific style, best described as the bizarre amalgam of a cartoon episode and an old-school circus. Many of the props are amusing two dimensional cardboard cut outs with which the actors interact. Accompanying the intentionally bad jokes are some ill-timed pre-recorded sound effects (read: loud trumpet sounds and a drum beat and cymbal following a gag) which are reminiscent of those clowns we’ve all suffered during childhood birthdays. Each scene ends with some high tempo whimsical tune, which accompanies the actors as they scuttle around the stage in preparation for the incoming scene, ala Benny Hill. I must admit, I enjoyed this unusual concoction of elements and I found myself giggling far more than I expected, but you have to be one who likes this sort of thing.

If you are looking for a light-hearted entertaining comedy, Mother of God! does fulfill that role satisfactorily. However, both the Playwright's and the Director’s Notes in the program seem to suggest the desire to transcend this superficial nature, and to present some serious themes upon which the audience is asked to ponder. Joseph’s hypocrisy is presented to the audience in such an obvious and explicit manner (the word “mask” was mentioned at least 3 or 4 times with some corresponding trumpet sound effects in case you hadn’t gotten the point) that it simply can’t be taken too seriously no matter what the intent of the director or playwright. Similarly, the idea that political and personal interests shape the tales that are passed down as fact throughout the ages, while perhaps being an interesting one, is completely lost within the whole gamut of ridiculous scenes, characters, and sounds.

Mother of God! claims to be both “profane and profound,” and while arguably being a little of the first it certainly falls short of the second. However, if taken at face value, this show can result in an entertaining couple of hours, with laughs and giggles throughout.

(Mother of God! plays in a limited run until March 26th, 2011 at the Richmond Shepard Theatre, 309 East 26th Street. Performances are Wednesdays - Saturdays at 8 PM and Sundays at 3 PM. Tickets are $15-$18. To purchase tickets visit TheaterMania or visit New Perspectives Theatre Company  for more info.)