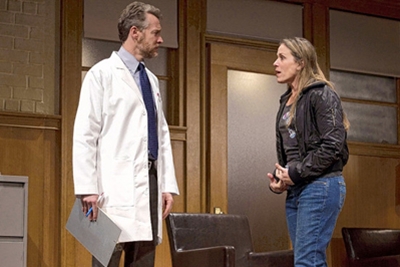 Pristine production values, heartfelt performances and a captivating personal conflict lie at the core of Good People, a new play (which could easily be a movie by a respected indie house), now playing on Broadway. This new dramedy by David Lindsay-Abaire (Rabbit Hole) is an ideal vehicle for its tremendous cast which includes Francis McDormand, Estelle Parsons, Becky Ann Baker and Tate Donovan. And the story itself is a treat to experience –- Lindsay-Abaire finds the humor in a tragic tale about the division of class in 21st century America. His message is insightful, but not didactic, and Daniel Sullivan’s direction allows the tale to unfold in a way that elicits sympathy on all sides. This is a quality piece of theatre, suitable for all tastes and, well, classes.

Frances McDormand plays Margie, a mostly endearing lower-class woman who has been dealt a tough hand. Now middle-aged, she has spent her life in Southie, a poor neighborhood outside of Boston. And she’s never been able to escape. A series of unlucky circumstances have kept her in a sort of American Dream purgatory –- it’s visible but out of reach, probably indefinitely. But Margie soldiers on and tries to make the best of things, that is, until she is fired from her job at the Dollar Store and has to do whatever it takes to find work so she and her disabled adult daughter don’t get evicted.

Through this ordeal, sassy Margie hardens; her good-natured attitude is tested and she is forced to fight for her future. McDormand is a powerhouse in this role. She gives her character a tragic vulnerability through immense strength – and she takes full advantage of her comic opportunities along the way.

Good People is a funny play, in the sense that humor helps people cope.  It is by no means a comedy outright, although there are some gloriously funny moments. Margie’s landlady Dottie, played by the incomparable Estelle Parsons, is awesomely sincere as she laments working nights, which really means making arts and crafts rabbits out of flower pots and googly eyes which she sells for $5 at the bingo hall.

Countering Margie's misfortune in this story is Mike (Tate Donovan), an ex-Southie resident who was able to get out, go to college and become a successful doctor, now residing in a fancy Boston suburb. Mike encounters his old pal Margie (with whom he had a brief high school fling), when she comes to his office basically begging for a job. The lines of class are carefully drawn; even though Mike has ascended social order, he holds on to his past as something to both hide from and embrace as another measure of his success in overcoming the odds. Margie, on the other hand, see's Mike's misfortune akin to luck -- despite a less than opulant upbringing, he had the parental encouragement to push him to his achievements and thus, he was able to make something of his life.

Lindsay-Abaire's awareness of contemporary classism makes for a fascinating study of two people who come from similar childhood backgrounds yet grow into completely different adults. Throw into the division Mike's classy, younger wife Kate (Renee Elise Goldsberry), who happens to be black. and we get an extra layer of expectation and perception that permeates popular opinion.

Good People is a slice-of-life play that exposes preconceptions about American society through the lens of one particular community. While I don't think it intends to teach so much as suggest, it does an excellent job at that. A Broadway audience is likely to include Mike's peers, and bringing Margie's struggles to this demographic is sure to at the very least open discussions -- and potentially change attitudes about what it means to "make it."

The stage at the Friedman theatre is massive, but you'd never know it from this production, which lets you hone in on its unraveling scenes in a very personal way. John Lee Beatty's sets are nuanced and perfectly evocative. A blaring score from punk band Flogging Molly takes you to Boston, particularly Southie, from its very first note. No detail is overlooked and everything gels. This is good theatre.

(Good People plays at the Samuel J. Friedman theatre through May 29, 2011. Performances are Tuesdays at 7PM, Wednesdays at 2PM and 7PM, Thursdays and Fridays at 8PM, Saturdays at 2PM and 8PM, and Sundays at 2PM. Tickets are $67-$126 and are available at telecharge.com. For more info visit mtc-nyc.org.)