(Sundays are pay what you wish) 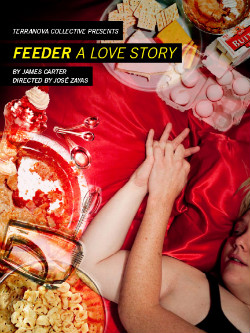 BOTTOM LINE: Explores a repugnant fetish gone awry to make a larger statement about how our internet-centered culture affects our relationships and sexualities.

It is undeniable that the internet has changed the way humans connect sexually. Those who cannot find adequate sexual partners on their own can now utilize dating sites, chat rooms, and online communities to find possible connections. For those whose sexual predilections are on the fringes of what is socially accepted, the internet has been revolutionary in allowing fetishes and fantasies to be explored through online discussion, pornography, and by meeting in real life those who share the same fixations. This ability to connect with anyone from anywhere in the world also allows for communities to spring up, like those for sexual fetish niches. TerraNOVA Collective explores this phenomena through their latest production, Feeder: A Love Story.

Jesse (Jennifer Conley Darling) and Noel (Pierre-Marc Diennet) are emblematic of this online niche phenomena, as a couple who connect online, and later in real life over a shared passion for the feederism fetish – men who find sexual arousal in feeding overweight women and from fetishizing their rotund bodies. This can be so incomprehensible to mainstream sensibilities that its depiction is often the stuff of either comedy or total revulsion. (My first exposure to this fetish was via the movie City Island, in which a teenage boy steals his mom’s credit card to access a feederism website, which consists solely of an overweight woman cooking elaborate feasts and then devouring them on camera.) While Feeder’s script certainly does draw plenty of laughter from the audience, the fetish is painted as a serious undertaking.

From the start, Jesse and Noel’s relationship centers around Noel feeding Jesse fat-filled snacks such as bacon wrapped chunks of steak and a gallon tub of strawberry ice cream. The two spend their first real date this way. In Noah's video blog, he exclaims with relish that she gained five pounds that weekend alone. Eventually the two take their fetish further with a goal of making Jesse gain weight to the point where she is completely immobile: 1,000 pounds. Jesse soon spends all her time in bed devouring the meals bestowed upon her by Noel, eventually weighing so much that she has to be lifted by a machine just so her bed sheets can be changed. Noel also utilizes a feeding machine, which feeds Jesse a constant stream of half and half and soda to augment her weight gain.

Feeder opens in the aftermath of Jesse and Noel’s breakup, as she records a video diary for a talk show after the host intervenes and deposits her in a facility for the morbidly obese, to aid her in returning to a manageable weight. Noel records a series of video blogs, pleading for the return of his wife, which he posts to his online community of fellow fetishists. A series of television screens surround the stage, which project the video footage the duo records. A changing video screen cleverly serves as the stage's backdrop.

An audience is always present within Jesse and Noel’s relationship, and it seems that a large part of the pleasure they derive from the feedings comes from exhibitionism, as they constantly share their undertakings with their online community. The show's creators also cleverly created multiple blogs and websites for Jesse and Noel, to be viewed by the audience both before and after the performance, which show how the voyeurism of the Internet affects their relationship. To their credit, both actors believably embody their characters; Jennifer Conley Darling is particularly convincing and enigmatic as a woman trying to find a healthy way to exist as an overweight woman and seek out sexual connections that are not damaging.

In the end, the play is not so much about the alarming fetish the two share, but rather about how the effect our reality show-driven and solipsistic online culture adds a new dimension to the ways humans connect both socially and sexually. Due to the presence of blogging and talk shows, Noel and Jesse's relationship is transformed from something personal to a sideshow act. While the exploration of the feederism fetish may turn the stomachs of some audience members, the play ultimately shows how our self-absorbed culture breeds voyeurism and exhibitionism.

(Feeder: A Love Story plays at Here Arts Center, 145 6th Avenue, through March 26, 2011. Performances are Mondays, Thursdays, and Saturdays at 8:30 PM and Saturdays and Sundays at 4 PM. Tickets are $20 (Sundays are pay what you wish) and are available at www.ovationtix.com. For more information visit www.here.org.)