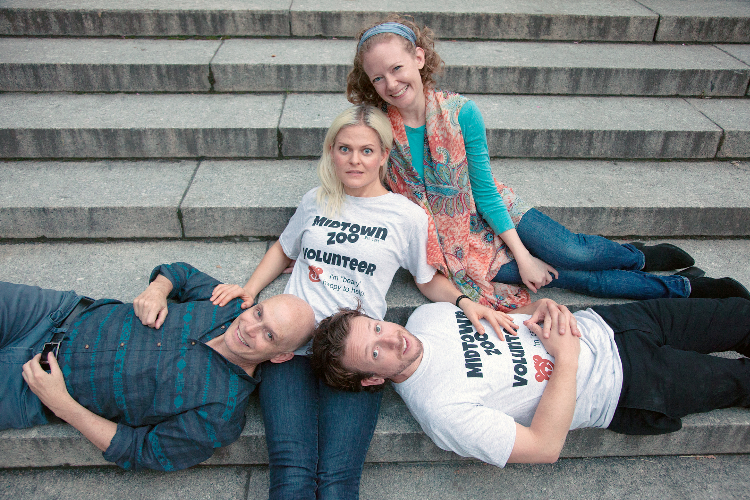 BOTTOM LINE: This light-hearted comedy focuses on a woman who opts to build her own robotic fiancé rather than deal with an actual human.

There's a question humans of the future might well one day contemplate: is it better to have a robotic romantic partner who obediently attends to your every whim? Or would you rather have a romantic relationship with a human, one with unreliable emotions and free will who might leave you?

Turned On explores this issue mostly circumstantially, with a scientist named Sophia (Estelle Bajou) who tries to solve her long stretch of singledom by building her own robotic fiancé with technology that she steals from her job. She tries to pass off her robo partner Hunter (Paul C. Kelly) as a real human (in the world of Turned On AI partners aren't yet commonplace), not telling anyone her secret. As a busy career woman, an obedient robotic partner seems convenient—he cooks and cleans the house, obeying her every command. To quell her family's demands that she get married, she organizes a wedding and coaches him on how to carry on conversations that do not reveal his true identity.

Meanwhile, Sophia is also trading sparks with her charmingly geeky friend Chad (Zach Garner) at the zoo where both volunteer and give puppet shows on environmentalism. Even with the obvious mutual attraction, Sophia seems determined to carry on with Hunter rather than explore a possible connection with another homo sapien. She even feels palpable guilt when she and Chad share a kiss. But Sophia is thrown for a loop when her free-spirited hippie friend Megan (Meg Richwine) breezes into her home unannounced, since Megan soon discovers what Hunter actually is. Unconvinced by Sophia's protestations, Megan is determined to push Sophia towards Chad rather than letting her settle for a robot husband.

Turned On has plenty of funny, laugh-out-loud moments. The skillful cast manages to maximize the humor in each line and make any implausibility seem plausible, all while showing a knack for physical comedy. Paul C. Kelly is particularly convincing as a robot, thanks no doubt in part to the guidance of director Gerry Appel.  The production is polished and streamlined, especially for the Fringe, and the set easily transitions from one scene to the next, helped by props and Andy Gordanier's sound design that help evoke each location. While Bergamo's script packs plenty of sitcom ready laughs, further exploring why Sophia would prefer a robotic partner to a human might help strengthen and deepen the piece. But even as is, Turned On is a lot of fun to watch.