Off Off Broadway, Solo Show
Runs through 10.24.18
FringeHUB, 685 Washington Street 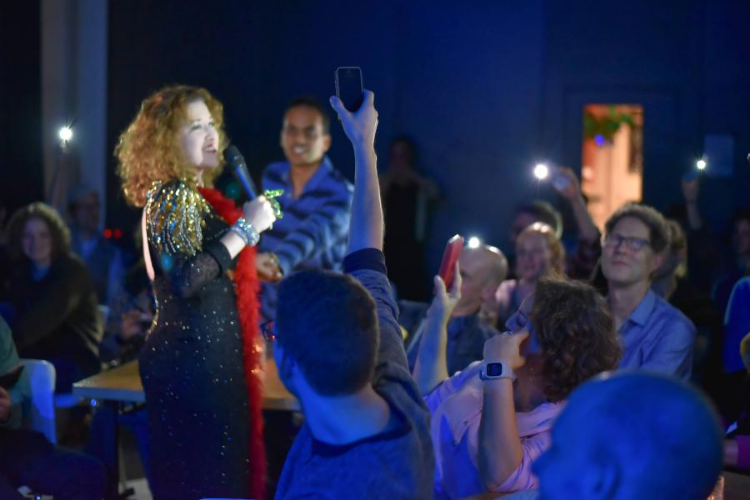 BOTTOM LINE: Trudy Carmichael just wants to sing, damn it, about all the powerful ladies who are getting it done!

With the Village Community School subbing in as a cabaret space, emcee Sean Taylor (Shane Taymor) warms up the audience as he seeks suggestions for Miss Carmichael's improvised performance. I'd been thinking Eleanor Roosevelt but someone beat me to it, shouting out "Hillary Clinton." Taylor asked what we knew about Clinton, prompting various suggestions from the audience, including Clinton's heretofore unknown love of hot sauce, her very loud laugh, and that once upon a time she was on The Golden Girls. There's also the chance to lend props (whether or not they make sense): on our night, people offered up several, including a riding hat and an eraser with the message "Girls Support Girls." And then the show was off to the races!

Resplendent in a sparkly, red number (perhaps from her Las Vegas act), Carmichael (Robin Rothman), wastes no time, bursting right into her opening number. With Clinton as the subject of the evening, this was an up-tempo anthem entitled "I Am A Golden Girl," an ode to Clinton's "long, flaxen hair" that prompts "people to stop and stare when they see me on the street. I am a Golden Girl." I got a little confused when Trudy was suddenly a twelve-year-old at her "coming out party," and declared "I'm not gonna take shit from nobody!" There was then a bit of impromptu comedy when Rothman, quick on her feet, remembered a prop supplied by an audience member—"Oh good, I still have my hand sanitizer. I'm going to wash my mouth out."

All of the numbers are created in the moment, some coming off stronger than others. Rothman clearly has a lot of fun with the wackiness spurred on by audience suggestions and the overall spontaneity. I actually enjoyed Trudy's narcissistic, over-the-top audience chatter more than I did the musical numbers—Trudy Carmichael Presents might benefit from more of this chatter. But of course each night is different—perhaps her turn as Eleanor Roosevelt would have killed musically.