There Has Possibly Been An Incident

Off Off Broadway, Play
Runs through 10.22.18
FringeHUB, 685 Washington Street 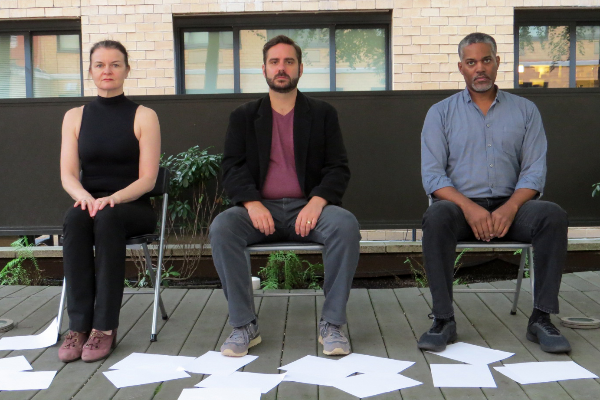 Ruth Kavanagh, David J. Goldberg, and C.K. Allen in There Has Possibly Been An Incident. Photo by Paula D'Allesandris.

For twenty years, Mind The Gap Theatre has brought British plays worth seeing over to our side of the pond. Americans who overdose on fake news may think terrorism is only directed at them. Fortunately, new perspectives on this issue can be found within Chris Thorpe's There Has Possibly Been An Incident. Stark tales of unexpected violence are told by a military officer (Ruth Kavanagh), a bystander (C.K. Allen) and an unaffiliated sociopath (David J. Goldberg). In the age of Brexit and right-wing reactionism, will Europe die a slow death or a quicker, more orchestrated one?

The three performers enter the bare studio and sit down in three identical chairs next to three identical drink dispensers.The tales they tell may not be read word for word off the script, but after every page is finished, all three drop that page on the floor.After a while, the fallen sheets suggest the creeping carnage of their stories, as in the shocking news of an army massacre of peaceful protesters, one which will likely not be blamed on the officers who were responsible.

Much of the back and forth storytelling concerns paranoia about Muslim immigrants supplanting the White Christian culture of Europe. It sounds a bit like Hitler in Mein Kampf railing at the idea of giving rights to minority nationalities within the Austrian Empire. The implication is that allowing any more immigration is tantamount to treating Europe as though it is already dead. Therefore, reasons the sociopath, it is necessary to kill those who support European policies, especially students. This character targets a Parliamentary Youth Meeting, where he goes into great detail about his murders of the undesirables. He notes that he believed he had to do it but didn’t enjoy it (since enjoyment would make him a monster). In one tangent, we hear that the Taliban in Afghanistan used to disguise male assassins as women; you can hide more guns under a burqa. The sociopath goes on to explain that the burqa was ironically the only item of religious clothing to be banned in France, and seems to hope that all Muslim clothing and Muslims themselves would be banned.

These stories are difficult to take in, even in a world where a small number of religious fundamentalists murdered the staff of the satirical magazine Charlie Hebdo in 2015. Are all Muslim immigrants to be banned just because a few will not tolerate any jokes about their Prophet? On the other hand, we also hear about the sheer joy of human action, even if the universe is oblivious to what we do. Courageous humans can also stop terrorists and save lives.

There Has Possibly Been An Incident is made up of long monologues, except for the last two pages, which are recited by the cast in unison. Director Paula D’Alessandris constructs this play as self-conscious but also self-questioning, as in the evasive title. One of the incidents will be covered up. Some terrorists are in fact natives, as we see more and more in the U.S. The three actors each deliver some fine performances, generally becoming less sympathetic as they progress through their violent tales. Perhaps in the U.S., where most residents are the result of some kind of immigration, xenophobia seems the most illogical. Muslims have come to Europe before, bringing civilization (see: the history of Iberia). These stories are the beginning of understanding the tensions that should not be allowed to destroy peaceful coexistence.

There Has Possibly Been An Incident is by Chris Thorpe. Directed by Paula D'Alessandris. Stage Manager is Avi Sereka.