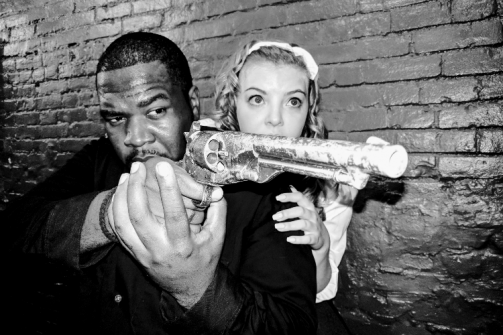 FringeNYC has returned to offer diverse and compelling stagecraft. C.A.G.E Theater Company is offering The Long Rail North by Michael Hagins, directed by Brock Harris Hill. This is a Civil War story in which people care for others in a way that transcends political and other allegiances. If you have experienced a Hagins play and are wondering if you might see some of his rapier-sharp fight direction, the answer is yes. The action of this play exists in a space where people from different sides of this polarizing conflict can have mind-altering conversations.

Private Thomas Morgan (Xavier Rodney) starts off the show by jumping on a north-bound train while carrying an unconscious Southern Belle. Thomas is African-American, which his doll-like charge, twelve-year-old Molly Barnes (Jordyn Morgan), acknowledges by calling him the n-word. Soon he defeats Confederate slave tracker Sergeant Major Andrew Vickers (Rick Wisneski) and pushes him off the train. Eventually, they are joined by train-robbing heroine Cassie Flowers (Anna Hogan) who is able to instill in Molly a sense of gratitude towards Thomas.

Thomas was part of a Union battalion that attacked the Barnes plantation in South Carolina. All of Molly's family, along with the slaves forced to fight, were senselessly killed. But why did Thomas flee his own army and rescue this racist little girl? These questions are asked by one of the "good guys," Colonel Peter Forest (David Berman), who is disposed to see freed blacks fighting for the Union as inferior "clowns." Who is Molly to Thomas? In a world where he can only depend on himself, and where white women as a rule cannot be trusted, what is Thomas's goal for happiness?

This play turns the typical heroic melodrama on its head. Thomas, a complicated character who has had to expend most of his energy just to be his own person, still has the patience to tell a genteel ignoramus that he can read and write. He also has some wisdom about runaway slaves that even a child can appreciate: "Do you like it when people tell you what to do all the time?" As Molly, Jordyn Morgan plays the flower of the Carolinas so well, I thought she would never stop fighting, yet she convincingly takes a giant step outside her mind. Anna Hogan as Cassie is a beautiful powerhouse, of whom both the Blue and the Gray are unworthy. Janet Mervin's costumes include two beautiful Civil War uniforms, a dress right out of a plantation portrait, and some attire better suited for swashbuckling. Hill’s direction rules this spare theater space, filling it with a truly unique, modern sensibility that many of the characters are unable to comprehend. What would happen if people today were open to ideas of equality?