Off Off Broadway, Drama
Runs through 10.28.18
FringeHUB, 685 Washington Street 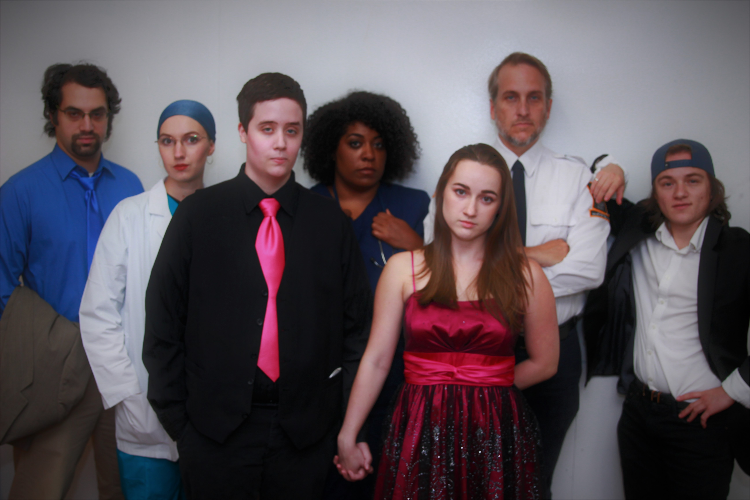 BOTTOM LINE: When a trans student is attacked at a high school dance, friends, teachers and family must take action.

While most progressives champion the rights of transgender individuals, not all teenagers will find their school environments prepared to accommodate them on their own terms. Jonathan G Galvez's Skylar is a rich story that may teach you something new—like acronyms for the expanding universe of queer people.

Security guard Adam Daniels (Eric Novak) rushes into the hospital waiting room looking for answers from his child’s teacher David Miner (Sam Lopresti). Mr. Miner rode in the ambulance with Skylar (Eli Denson), who was found knocked unconscious at the high school dance. Before anyone can get to see Skylar, Adam must deal with a witch of a nurse (Dana Scurlock) who wants to clarify that a girl was recently admitted to the hospital. Adam, Mr. Miner and Pamela (Kaitlyn Gill), Skylar’s date, have all been supporters of Skylar’s choice to live as a boy.

Through some flashbacks, we learn that Skylar’s parents had picked gender-neutral names for their new baby. Skylar’s mother died in childbirth, leaving Adam as his guardian. We see Mr. Miner stand up to his boss, Mr. Gonzalez (Mark Levy) for Skylar’s right to form a Gay-Straight Alliance at school. This should be treated like any other student club, but Mr. Gonzalez implies that Mr. Miner’s upcoming tenure review may be in doubt if he “encourages” the students to be proud of their identities. Indeed, many of these characters are in search of an identity. Pamela has grown up without much sexual interest in boys or girls. While studying for Chemistry, Skylar sweetly refers to her as a noble gas, inert until acted on by a force like Skylar himself.

Scott (Ashton Garcia), an athlete and the student who found the unconscious Skylar in the school bathroom, visits the hospital to bring word that the rest of the students have occupied the dance in solidarity with Skylar. Ironically enough, Adam, who is suspicious of Scott, tries to tackle him. As Adam talks through his anger with Mr. Miner, the two become friends and plan to have a family dinner in the future. Adam describes how religious leaders recommended conversion therapy for Skylar, but his one takeaway from Christianity is that God loves his son. Will there be justice for Skylar? How does one go back to school knowing that one’s assailant is there?

Eli Denson is superb as Skylar; kudos to this team for casting a trans actor in this role. And the piece received a visceral reaction from the high school students who attended my performance. Skylar, along with the accompanying FringeHIGH talkback session, paints a picture of a climate of increased bullying of trans youth. At our talkback Galvez, a former public school teacher, warned of the difficulty of proving an attack on a student. And director Kristen Keim confirmed that she and Galvez have worked together for a long time on this production, which is designed to explain trans people to one’s conservative-minded relatives.