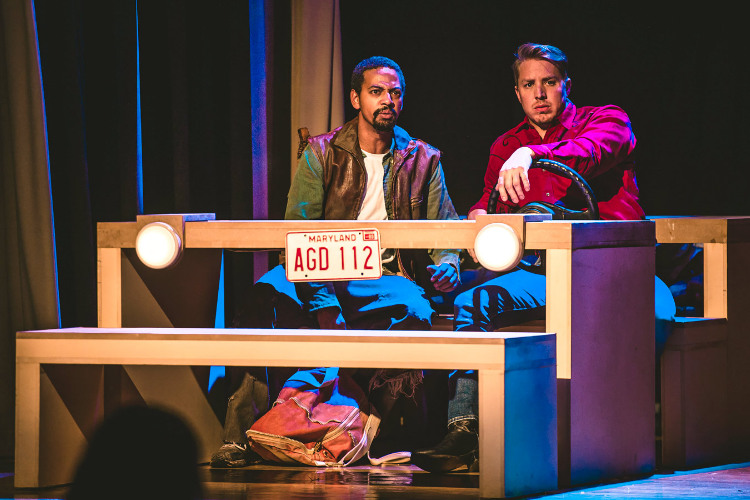 BOTTOM LINE: ONAJE is a high-stakes story that shows the power of people standing up to racism.

ONAJE, a new play by Robert Bowie, Jr., is the most dramatic, fleshed-out, near-cinematic play I have seen at this year's Fringe. As its cast of nine jumps back and forth between scenes set in 1980 and 1967, a powerful civil rights story emerges.

Onaje (Curtis M. Jackson) is a fast-talking, cosmically aware African-American man who is first seen amidst the glory of nature, talking to the stars. It turns out he is right in the middle of the road, and is almost hit by a car driven by Richard (Adam Couperthwaite) and Belle (Sheila Joon Ostadazim), a white couple who got engaged in Reno and are on their way to Richard’s family home in Maryland. There is some reluctance about giving Onaje a ride, but after they share some reefer, they get along better.

Onaje tells Richard and Belle about a hitchhiker that his father Dan (Jay Ward) picked up in 1967, around the time of the race riots in Cambridge, Maryland. We see Andrew (John Dewey), a straight-laced white guy from Boston, on his way down to Atlanta to help with voter registration. Instead of letting Andrew sleep by the side of the road, Dan brings him home to stay with him, his wife Sarah (Mary E. Hodges), and his daughter Faith (Tinuke Adetunji). As they settle in for a peaceful dinner, Dan’s son (the future Onaje) comes home fresh from the Cambridge riots, where he shot at Henderson, a police officer. But before Onaje can flee, Henderson (Tim Rush) and his Klan-member friend Richard Middleman, Sr. (Bristol Pomeroy) are in Dan’s house, where they take sadistic pleasure in forcing Onaje to whip Andrew.

Back in 1980, Onaje offers to play the preacher and marry Richard and Belle. Belle’s colorful phrases (she says of Richard “his idea of foreplay is a stuck zipper”) give way to an earnest desire to know who her fiancé really is. She will forgive his lies about his past as long as he is honest about himself and his family. Ultimately, Onaje figures out just who Richard is, and just where they are going, leading to a resolution that emphasizes the difference between those who can envision the universe and those who try not to learn anything their entire lives.

Pat Golden’s powerhouse direction shows just how far people will go to conceal the truth. The contrast between the 1967 and 1980 versions of these characters is astonishing. For those who wish to learn more about the turbulent Civll Rights Movement, ONAJE is a good place to start. Jackson plays Onaje as that refreshingly flawed type of hero. Adam Couperthwaite and Sheila Joon Ostadazim have great chemistry as Richard and Belle, convincingly portraying two young people from very different backgrounds. Bevin McNally’s costumes excellently evoke 1960s small-town America. Dedalus Wainwright’s strategic scenic design includes the frame of Richard’s car and the suggestion of Dan’s house, allowing for brief transitions that keep the story flowing. Joyce Liao’s lighting not only saves Onaje’s life, it also helps this conflict unfold impressively. As I write this review, the rest of the FringeNYC run is sold out. I can only hope more folks can see this amazing (and given the nascent return of white supremacists, eerily timely) play very soon.