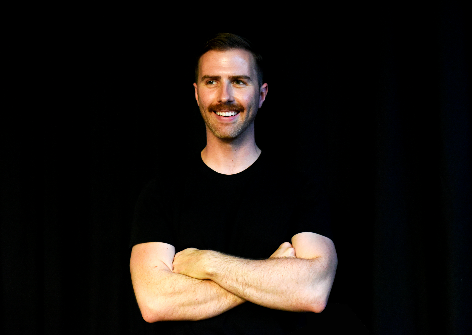 BOTTOM LINE: Though framed as a flip comedy, Latter Gay Saint shines when Craig Mangum leans into his complicated feelings about being torn between two identities: Mormon and gay.

On the surface, Latter Gay Saint is exactly what it sounds like: a campy one-man show that chronicles writer-performer Craig Mangum’s journey coming out and coming to terms with himself as a gay man raised in the Mormon church. That said, once the camp subsides, Mangum's story becomes a heartfelt testimony of how to exist in the modern world with a pluralistic sense of identity.

The show took some time to sink in, for me anyway, mainly because the first 15 minutes are designed to get laughs out of the Mormon and ex-Mormon audience members while the rest of us fumble a bit to keep up with the inside jokes. (That said, the exuberant ex-Mormons in the audience were having a grand time.) Eventually, Mangum gets to a more universal place when we learn about how his missionary experience gave him so much joy, as well as a sense of purpose and belonging. This reality check helps ground the camp humor with a respect for what Mormonism as a community can provide, before Mangum becomes disillusioned by Mormonism as an institution and creates a plan to break away from the church.

Brava to director Michelle Walson Kuykendall for slipping in subtle yet impactful staging where she could: there’s a repeated motif in the show where Mangum sits for “interviews” (both literal ones with church leaders, and a series of questions from a Grindr date), all facilitated by a disembodied backstage voice enacting Mangum’s partner in the conversation. This allows Mangum to pop in and out of these interviews, providing commentary and subtext for his answers in the form of asides to the audience.

I saw an early performance, and Mangum will likely have worked out some of the flubbed lines and less-than-seamless costume changes as he gets further along in the run. That said, the drag elements and projections illustrating Mangum's journey coming out in the church community are both fun and informative supplements to the storytelling.

I certainly learned a lot about Mormonism that I wouldn’t have otherwise known, so I appreciate that aspect. More importantly, Latter Gay Saint is a refreshing story for our times, in the way it wrestles with identity, individuality, and a religious institution that can be deeply problematic but can also provide a spiritual home to millions of people.