I Want a Country 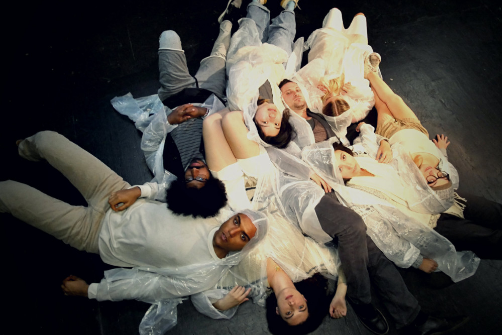 The cast of I Want A Country.

BOTTOM LINE: I Want A Country is an expressionistic smattering of ideas about what it means to want to immigrate to a new country, and what an ideal new country might look like.

It comes as no surprise that a play by a Greek playwright has a lot to say about migration, what happens to individual identity when your home country's government fails you, and what it means to truly belong in a country.

I Want A Country is an abstract take on mass migration of immigrants from a struggling nation. We follow a diverse ensemble of people dreaming of a new country where they can thrive and guarantee a worthwhile future for themselves. The terms under which the “country is dying” are vague, but we are told they are talking about Greece; likewise, we’re not quite sure where the ensemble of migrants intends to go but it sounds a lot like the U.S. But perhaps they will make up their own country instead? As they prepare to get on a boat and go on their journey, the ensemble imagines what their new lives will be in their new country. What are the requirements for citizenship? What kind of economy will there be? What will they do with their memories of the old country? And what if the new country isn’t as wonderful as they hoped?

Along the way, a few personalities pop out from the crowd to offer their perspectives: an artist who wants everyone to feel welcome in the new country, a businessman uninterested in protecting the weak, and a child who just wants to feel safe at night. For the most part, though, the ensemble’s arguments blend together in circuitous questioning on what their new country should be like. But can a new country be truly revolutionary and great if the people creating said country can only imagine previous (imperfect) models of nations as examples?

The most striking image that director Lyto Triantafyllidou creates is the recurring motif of the ensemble in their triangle-shaped “boat.” The ensemble, at times holding lanterns, sways together as they wait and wonder what’s ahead on the new shores they will find, in an image that's become all too familiar in the mass migrations of recent years.

Despite being born from the nation that created the Aristotelian dramatic arc, I Want A Country is not a traditional story with a linear narrative. (In fact I had several moments where I was confused whether or not the ensemble had even embarked on their journey yet or if the journey thus far was imagined.) This is the kind of theater that feels more like art exhibit, where images are assembled with a loose theme linking each frame. You as the viewer are asked to piece together a narrative and a meaning for yourself from the series of images. Given this, I'd recommend the play for folks who are more interested in idea-based theater than action-based theater, and folks who don't mind a more experimental bend in their plays.

Perhaps the structure of I Want A Country is meant to mirror the experience of an immigrant seeking refuge. We as an audience are left with no guiding principle through the story other than “we want a new country,” in the same way that a band of migrants in the middle of the sea may similarly have no guide. Thankfully, even when we are lost at sea, there are still beautiful images to share and worthwhile questions of how to share a society to explore.