Off Off Broadway, Solo Show/Concert
Runs through 10.26.18
FringeHUB, 685 Washington Street 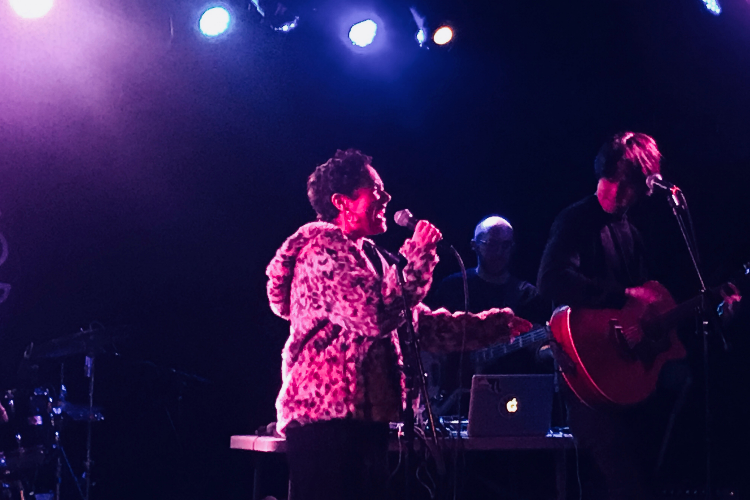 Keren Abreu in From a Distance. Photo by Manuel Valle.

BOTTOM LINE: This musical showcase is light on theatricality and food for thought, but Keren Abreu and her band show great technical skill and create some amusing and pleasing songs.

Part of the fun of the Fringe Festival is the gamble—the short descriptions are often vague and mysterious, so it's unclear just what sort of show you are going to see. Keren Abreu's From a Distance is one of those shows, one that shows just how impressively diverse the offerings at the Fringe can be. From a Distance consists primarily of Abreu singing a "song cycle" of original songs all about the role that the internet plays in her life, focusing mostly on the time span of the nineties to early aughts, back when AOL CDs and chat rooms were still relevant. Her beautiful, bluesy voice sings silly ditties that cover such topics as wondering who her brother is chatting with online to the instant gratification she gets from likes on Instagram. Later, in one of her strongest numbers, she sings about the pain of being stood up on her dating app blind dates.

While I would have liked more theatricality, or else more complexity or a greater range of topics, Abreu is undeniably a talented singer with an impressive range capable of tackling myriad styles. Her backing band also shows significant technical skill. The school cafeteria where the show is performed is also cleverly decorated in a prom theme, with circular tables bedecked with light-up neon pink hearts and framed photos of Abreu's beloved cat. Meanwhile, tulle and fairy lights help give the stage a dreamy feel that fits in perfectly with Abreu's focus on nostalgia. Music fans who love lamenting their obsessions using YouTube cat videos will probably find a lot to love. Those looking for something with a strong narrative should perhaps look elsewhere.

From a Distance is written and performed by Keren Abreu. Lighting Design by Caroline Trewet.