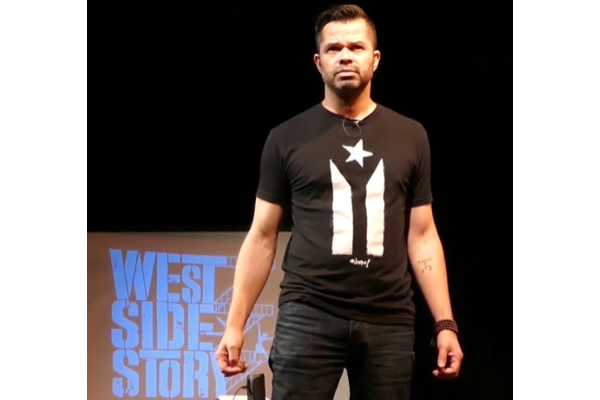 The beauty of live theater lies in its ability to affect the audience. Every so often, the audience, the performer, and the story come together and change right there. Such was my experience with Javier Morillo's Broken English, Mother Tongue. This is a show about why Puerto Ricans are proud of being Puerto Rican.

Morillo warmly tells us his life story. His father joined the U.S. Army to make a better life for his family, so they all moved between army bases in Kentucky and Texas while his father went on several tours of duty in Vietnam. Left in new surroundings, Javier’s mother learned English by watching General Hospital and I Love Lucy. Thus, part of Javier’s mother tongue—his mother’s tongue—was Broken English. The crash course paid off when the Army wives noticed that white recruits were not being redeployed as much as their black and latino compatriots, and started a letter-writing campaign. This kept Javier’s father on the base through the end of that war.

There are quizzes—I’m sure New Yorkers will do fine—that both teach and energize the audience. Think Columbus "discovered" San Juan? Think again. Broken English, Mother Tongue corrects many of the misconceptions about the island that many in the U.S. might have, as well as addressing certain pervasive cultural images. What does West Side Story mean to Puerto Ricans? Our mixed audience murmured and giggled at this. Perhaps some teachers looked at the five-year-old Javier and saw a member of the Sharks. One teacher complained that the child didn’t respond to his own name, which she was mispronouncing. We hear of Morillo’s enjoyment of Anglo music like Air Supply as a “rockero” in Puerto Rico, and of his culture shock when studying at Yale (pronounced more like “Jail”).

When asked, the mostly Puerto Rican audience was able to name all five Boricua winners of the Miss Universe pageant. Morillo argues that this great pride in famous citizens helps compensate for a lack of independence and the inability of the people, even though they're U.S. citizens, to vote for a President (including the ones who can and do send them off to war). Most poignantly, Morillo addresses the Jones Act of 1917 that allowed Puerto Rican men to be drafted, as well as the government’s disregard for the island exactly 100 years later, during Hurricane Maria.

Broken English, Mother Tongue is beautiful and well worth seeing. Beliza Torres-Narváez’s direction brings out many performing modes, such as the “professor,” the playful child, and the inquiring adult. There is time to talk about signs of PTSD in Javier’s military veteran relatives, and to both appreciate and disdain the military medical care his mother received. And any of Morillo’s assertions about culture are easily tested on the audience, as when he mentioned the song "En mi viejo San Juan" and the front row began to sing it for him. Bravo!