Off Off Broadway, Performance Art
Runs through 10.28.18
FringeHUB, 685 Washington Street 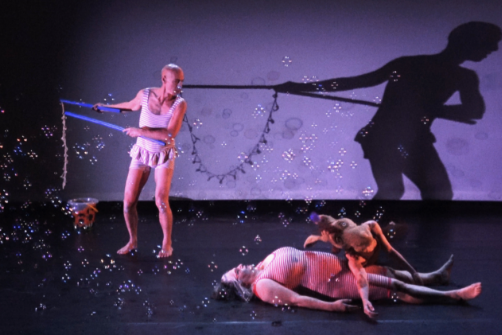 BOTTOM LINE: A multi-media theatrical fable on the fragility of life, the inevitability of loss, and how little effort it takes for humanity to sink into cruelty.

Kobayashi Issa's haiku dots the final period of the breathtaking theatrical journey that is Ants, almost bringing me to tears. There is a potent tenderness in this piece: how it overtakes you in unexpected ways, and how it tackles subjects that are severely dark with relentless humor.

Hailing from Israel, Ofra Levi Yehudai and her team deliver an exquisitely crafted piece of multi-media performance art that is at first glance sufficiently cryptic, but draws you in effortlessly, ultimately resonating in a deep way. Ants begins in melancholic whimsy as an ensemble gathers on a beach, with a song about the transiency of summer (lyrics by Hanoch Levin) ringing out in the background. Even though the music sets a somewhat ominous tone, the subject of death catches you almost off guard as a gunshot disrupts the apparent peace and satisfaction.

Ants is in a sense a three-dimensional series of short stories set in motion with thematically connected vignettes. Throughout the hour-long show, a multitude of characters are introduced: a father telling his child how her mother fell into a dreamless sleep two years ago, a woman who gives birth to an infant the color of clay with a head of a horse, and then a woman with a Medea-like presence who kills her deformed baby—all this with a tenor singing a gorgeous barcarole in the background. In fact, the music is astoundingly impressive throughout. Italian Opera, Irish folk song, Israeli ballads, and the sad American classic "End of the World" have never fit so nicely together.

A favorite segment is when a queen's two pets compete for her favor when she throws an invisible ball for them to catch. The two end up fighting each other to death, just to be ignored by their master. It's a perfect metaphor for most wars—often resolved in bloody violence, with groups or countries fighting over scraps left behind by a larger power, one that benefits from the exhaustion of poor nations becoming even more weakened.

The backdrop of the nature of ants makes the piece even more poignant. It's said that blind ants follow a trail of scent—however, when the leading ant loses its sense of smell, the rest will still follow it, all the way towards their eventual and inevitable death.

WIth elements of clowning, animated videos (by Sharon Gazit), expressionist choreography (and even some bubble magic!) Ants could easily lose its center. But it never does—it maintains its gravitas and continues to illuminate its central theme of loss. At the same time, and with such a sense of humor, Ants moves and delights in an aesthetically sound way. The variety of creative expressions included in this piece also deserves a round of applause. The last time I saw Israeli theater was Nalagaat Theater's Not By Bread Alone, which set my expectations extremely high. I dare say Ants exceeds my wildest dreams about what is possible in theatrical storytelling.